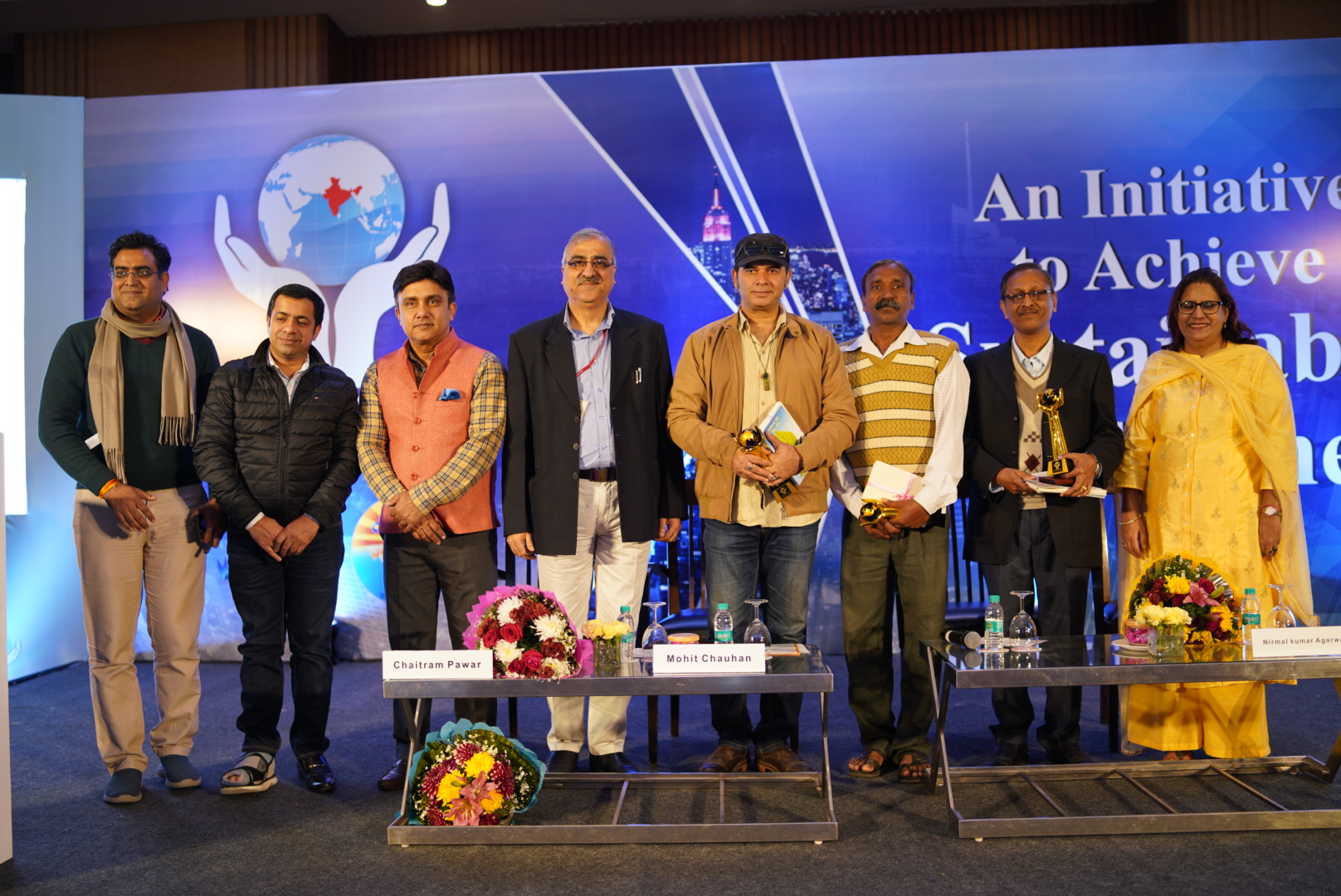 
New Delhi, December 24, 2019 : A real-life hero, Chaitram Pawar from Maharashtra’s Baripada village in Dhule district showed to the rest of the country how with dedication and focused work, the man on the street can do wonders and force the government to sit up and take notice. At a time when water, or rather the scarcity of water, is leading to water wars, here in this tiny village, Chaitram brought development to Baripada, a small, with just 108 Vanvasi families and a population of just 785, surrounded by a 445 ha forest. It supports a rich vegetation composed of species such as teak or saag, devakhumba, palas, pangara, ain, kumbha, moha or mahua, neem or kadulimb, karwand and others. Wild animals found here are panther, Indian wolf, black-naped hare, fox, monitor lizard, and others.

Presenting his success story at the day-long Sustainability Summit Panchjanya and Organisor the flagship publication of 73 year old Bharat Prakashan (Delhi) Limited, the environmental activist said that in the early 1990s the village faced scarcity of firewood, food and water due to deforestation. A hill near the village became barren, and one-third of village wells went dry.

With the help of local NGO, VanvasiKalyan Ashram, he organized the villagers and laid the foundation of self-development, a model that has vowed everyone. What he did was to take full benefit of all the government schemes and get the villagers organized to start the afforestation programme and then tackled the water shortage. Slowly it became a movement and today there are people from different parts of the country and the world visiting the village to look at how they managed to conserve the biodiversity in their surroundings. Strict punishments for cutting trees, no bullock carts in forests etc, villagers forming watch dog squads.

Today, the forests are richer and farming activity has increased manifold, Pawar told the Summit attended by environmental activists, bureaucrats, political representatives and people from different walks of life.

The summit is an effort to bring all of them onto a single platform and come out with a bunch of workable ideas to add value to government efforts to fight climate change, which is already causing havoc in many parts of the world.

Participating in a panel discussion on Water Rejuvenation or Water Wars: What are we heading for?, Bollywood singer Mohit Chauhan, who hails from Himachal Pradesh, said there is no life without water and there is no water without jungles. His observation based on his own experiences along his life journey, only goes to show how correct Pawar was in his assessment and action plan was to conserve forests as the first step towards repairing the damage to environment caused by unfettered felling of trees in forests.

Jal (water), Jungle, Janwar (animals) are all connected the Bollywood rock star said and recalled traditional knowledge and wisdom handed down for generations and the Indian lifestyle was the proper model to follow for maintain environmental sustainability.

Even today, many places in Himachal Pradesh have traditional water bodies, for humans and animals, alive and people ensure that groundwater is recharged through their traditional practices. And wherever, the balance is disturbed, the singer said led to even loss of economic activity and loss of livelihood for people. Mohit Chauhan cited the example of Bharatpur bird sanctuary of Rajasthan where the number and variety of migratory birds fell drastically due to afforestation in the region and this, in turn, resulted in a fall in the number of tourists that led to a fall in tourism business, affecting the livelihood for people of the region.

Which is why, the concept of sustainability is gaining more currency in the development debate over the past few decades. War against nature in the name of development is still an issue that the environmentalists are grappling with and the Sustainability Summit is an attempt to come out with suggestions for action to the government.

Mr. Nirmal Kumar Agarwala, of HCS Infotech, also spoke about the increasing need for urgent action on the environmental issues in view of the climate change-induced disasters taking place and more importantly, those that are waiting to happen.

On the occasion Environmental activist, Mr. Manu Gaur, President tax payers association of Bharat highlighted seriousness of the issue and pressure of population as a hurdle in conserving nature.

He presented some key statistics and environment landscape to help define the direction of the country’s sustainability efforts.

Mr. Hitesh Shankar Editor, Panchjanya said that the country’s culture and traditions formed the foundation of the sustainability as basic tenets have been handed down to us from generation to generation. India is one of the few countries where Mother Nature is worshipped – sun, trees, water and cow – and the simple lifestyle that requires lesser resources help in maintaining environmental sustainability.

Mr. Prafulla Ketkar, Editor Organiser, said that the Summit on Sustainability was the first of a series of such interactions with experts and their interface with all the other stakeholders with an objective of evolving an action plan for the consideration of the government. Water conservation forms a significant aspect of the overall environmental sustainability.