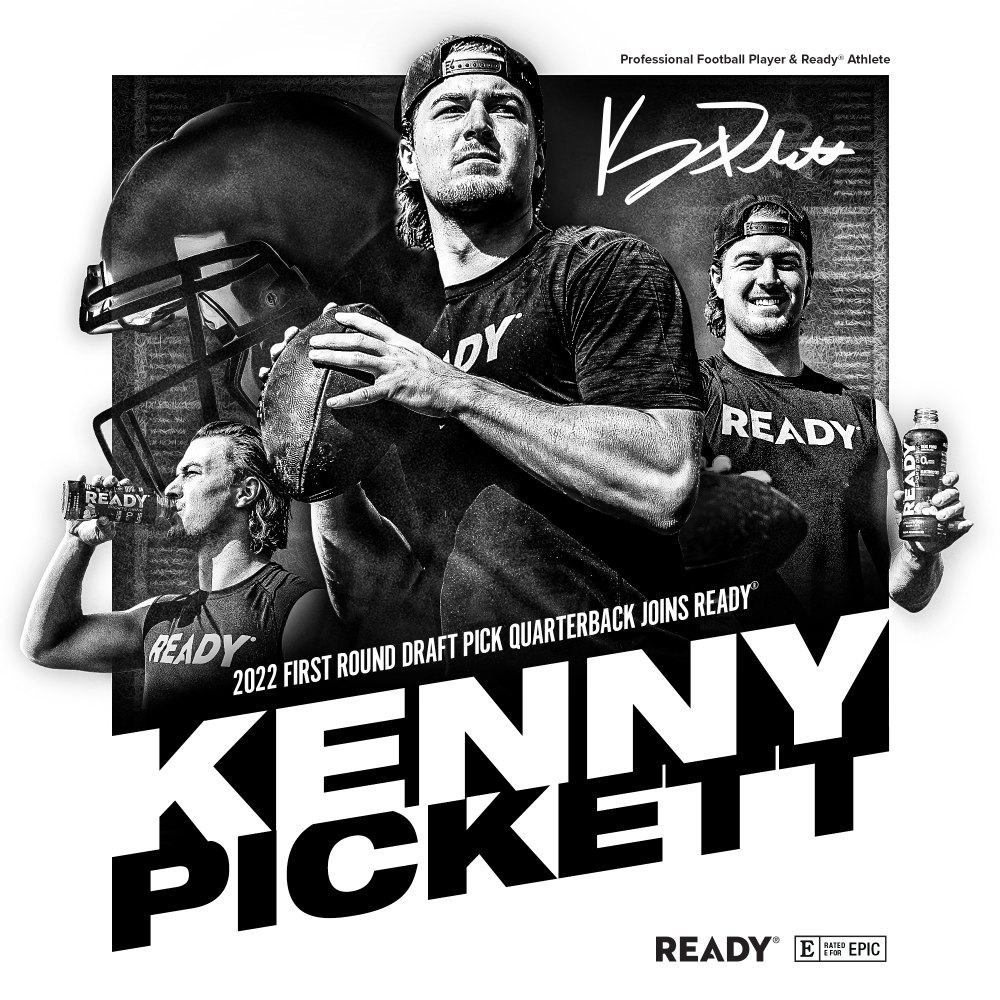 
Ready®, one of the fastest growing sports nutrition brands in America with co-owners Aaron Donald and Giannis Antetokounmpo, today announced the signing of NFL first round draft pick and Pittsburgh Steeler rookie quarterback Kenny Pickett as a Ready® athlete.

Pickett was already quite familiar with Ready® having used its products while at Pitt, so the partnership was a logical extension. “Kenny already knew the fueling and recovery benefits of our products from his own experience. We really focus on our mentality and mission; and it became obvious he was a great fit to be a member of the Ready® Team,” said company founder and CEO Pat Cavanaugh.

Pickett was the 2022 first-round draft pick of the Pittsburgh Steelers after a stellar senior season when he was a Heisman Trophy finalist, first team All-American, and voted ACC Football Player and co-Athlete of the Year while leading Pitt to an ACC Championship.

“Kenny is a great example of continuing to work hard and remembering it’s not where you start it’s where you finish, which is a pillar of the Ready® mentality that defines our brand,” said Cavanaugh. “Throughout his career and breakout senior season, he continued to get better and better achieving one goal after the next. He’s just getting started.”

“I’m excited to be part of the Ready® Team especially since I’ve experienced the benefits of the products when I was at Pitt,” said Pickett. “The more Pat and I spoke about the brand and their mission to inspire athletes to take more pride in their effort than their talent; that attitude and mentality resonated with me and how I approach my football career.”

About Ready® (www.teamready.com)
Ready® was founded in 2012 by former University of Pittsburgh basketball team captain and Ernst & Young Entrepreneur Hall of Fame member, Pat Cavanaugh. Ready® is a rapidly-expanding sports nutrition company that specializes in supporting athletes achieving their goals. The company’s all-natural portfolio includes their super fruit-based sports drinks, protein and snack bars, protein water, plant based functional snacks and protein powder. Its products are currently available in over 17,000 retail locations across the United States. Over 200 college and university athletic programs have provided their student-athletes with Ready® products with the brand currently being the Official Protein of UCLA athletics. Ready® is also the Official Sports Drink of seven NCAA Division I Conferences along with highly respected Gonzaga athletics and its nationally renowned basketball program. World Champion and NFL great Aaron Donald along with world basketball icon and NBA two-time MVP Giannis Antetokounmpo are co-owners in the company. Ready® has also been chosen as the Official Sports Drink of The Amateur Athletic Union (AAU), the largest athletic organization in the United States with over 700,000 athletes that compete in 41 sports.