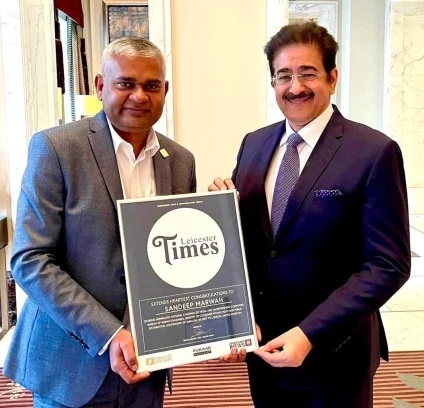 
London: It is great to learn that Dr. Sandeep Marwah has been nominated as the National Chairman of Media and Entertainment Committee in Bureau of Indian Standards, Ministry of Consumer Affairs Food and Public Distribution Government of India under Union Minister Piyush Goel. His expertise and experience will definitely bring the change in the Republic of India,” said Romail Gulzar President Leicester Times, United Kingdom while presenting the memento to Dr. Marwah at Hotel Langham during his visit to London recently.

“I must pay my thanks to this beautiful gesture, which is touching and motivating. We are team of 60 experts from different segments of the industry and large number of representatives from different ministries of Government of India. It is necessary to set the standards in media and entertainment industry which has grown to 6th in the list in India,” said Sandeep Marwah President of Marwah Studios and Chancellor AAFT University of Media and Arts.

Romail Gulzar FRSA is founder and director of Leicester Times & Pukar Group, a multinational media and events company headquartered in Leicester, England. Romail is also a successful entrepreneur and has contributed greatly to the East Midlands business sector with his commercial endeavours. He also passionately supports the development of upcoming local talent and is renowned for offering space on his platform for budding writers, broadcasters and cameramen. He is the product of AAFT- Asian Academy of Film and Television.