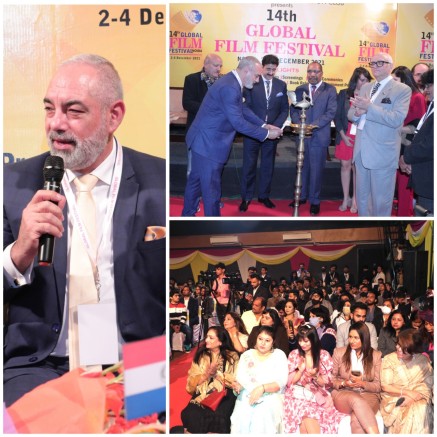 
NOIDA: 7 Boxes in Spanish (7 Cajas) is a Paraguayan thriller film directed by Juan Carlos Maneglia and Tana Schémbori. The film 7 Boxes was released on August 10, 2012, and received praise from critics and the public as well as breaking box office records in Paraguayan cinemas. 7 Boxes won the “Films in Progress” in what was the first unanimous decision in the festival’s history. The film participated at the Moscow International Film Festival in 2013.

“We are very happy that a film from Paraguay is a participating in 14th Global Film Festival Noida 2021. We are also thankful to Indo Paraguay Film and Cultural Forum for being part of the grand show. I am sure you all will love this super hit film,” said H.E. Fleming Duarte inaugurating the screening of film.

The cast includes Celso Franco as Victor, a porter who aspires to become a famous actor. He is recruited to transport seven mysterious boxes in exchange for one hundred dollars. Lali Gonzalez as Liz, a young woman who accompanies Victor on his mission. Nelly Davalos as Tamara, Jin Hyuk Johnny Kim as Jim, Víctor Sosa as Nelson, and Nico García as Luis.

“This one hour forty minutes film is an asset to the festival. The film has added a lot of the creativity to the whole show,” added Dr. Sandeep Marwah President of the festival. Radha Bhatt, Dilnaz Irani, Raghubir Yadav, Aroon Bakshi, H.E. Paulias Korni Ambassador of Papua New Guinea were also present at the screening in a house full show.