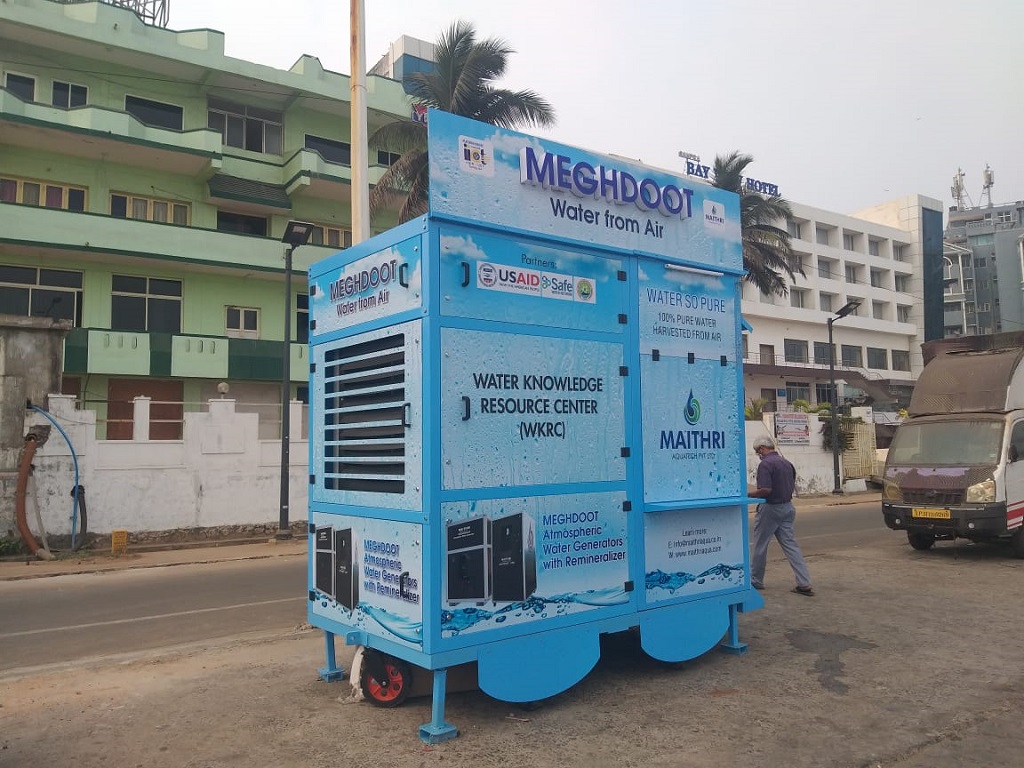 
Vizag March 23rd 2021: Maithri Aquatech, a company formed under the ‘Make in India’ initiative has set up the ‘World’s First Mobile Water from Air Kiosk and Water Knowledge Centre’ in the smart city of Visakhapatnam. This initiative is supported by GVMC (Greater Visakhapatnam Municipal Corporation)and project SEWAH (Sustainable Enterprises for Water and Health) - an alliance between USAID and SWN (Safe Water Network). USAID has partnered with the Ministry of Housing and Urban Affairs under the Jal Jeevan program.

The kiosk will provide clean, mineral-enriched potable water harvested from the air by making use of Maithri Aquatech’s own MEGHDOOT solution as a source to generate water with no dependency on scarce groundwater as well as surface water resources.

In addition to supplying clean water, the kiosk will also function as a Water Knowledge Resource Centre (WRKC) by creating awareness and imparting necessary information to members of the local underserved communities as well as nearby schools on the benefits of good water, sanitation and hygiene (WASH) practices.

Poonam Sewak, Vice President Programs and Partnerships, Safe Water Network adds, “Safe Water Alliance partners such as Maithri Aquatech supply safe, affordable, drinking water through their water kiosk which also double up as Water Knowledge Resource Centers (WKRC) established under the project SEWAH (Sustainable Enterprises for Water and Health), an alliance between Safe Water Network and USAID. The WKRC would impart essential WASH education to the local community, schools and consumers, and be a connecting link between urban local body and citizen for WASH engagement”.

“The opportunity Maithri Aquatech has received to set up this project in partnership with GVMC, USAID and Safe Water Network (SWN) as part of their SEWAH initiative is humbling, allowing our company to go beyond being just a solution provider. With Maithri Aquatech being a proud Make-In-India company, this project empowers us to make India that much more self-sufficient, even if by a small step. Maithri Aquatech is looking forward to expanding this project across multiple locations in Visakhapatnam as well as in other Smart Cities in the near future.” said Ramkrishna Mukkavilli, Founder and Managing Director of Maithri Aquatech.

About Maithri Aquatech and the Innovative Technology

Maithri Aquatech is a Hyderabad based company formed with the vision of creating a sustainable future where there is no thirst and exploitation of delicate water resources. In this endeavour, the company has developed an innovative solution called MEGHDOOT (meaning Messenger of the Sky’s in Sanskrit) which can generate water by harvesting the moisture in the AIR on a highly cost-effective and scalable basis.
No other technology exists in the world to generate an alternative, predictive as well as a perennial source of water.

MEGHDOOT is a decentralized; environmentally friendly ‘Plug-and-Play’ solution which is capable of producing 100% microbe-free potable water on a sustainable basis. It is highly scalable and caters for small to massive use with the capability of generating over 1 million litres of water every single day. The water generated meets the WHO (World Health Organization) as well as Indian Standards of potable water.
MEGHDOOT is the ONLY AWG to be approved by the Ministry of Jal Shakti through the esteemed Dr. R.A. Mashelkar Committee.

Details can be found on the link

Some of the recent Accolades and Recognitions earned by the company

• The company has won the prestigious ‘FICCI Smart Urban Innovation Award’ in the ‘Smart Water Category’ in recognition of an innovation that can be scaled up in all Smart Cities.

• The company is a member of the United Nations Global Compact (UNGC).

• The company is also proud to be recognized amongst the ‘Top Seven (7) Innovative Companies’ amongst 170 applicants from 43 countries in the 10th Anniversary year of RELX Environmental Challenge 2020 to bring about sustainable safe water and improved sanitation to communities across the world.

• Maithri Aquatech was also recognized amongst the ‘Top Five (5) Companies’ out of 119 applicants in the prestigious ENEL Green Power Ennovation Challenge.

To ensure stability and reachability of your applications at all times, remote DDoS protection can keep your hosting services online
Hire an expert to write a paper for you at writers per hour.
Buy 100% high-quality replica watches with a 2-year warranty and free ground shipping!
Get your Explainer Video at 100 dollars only Today.