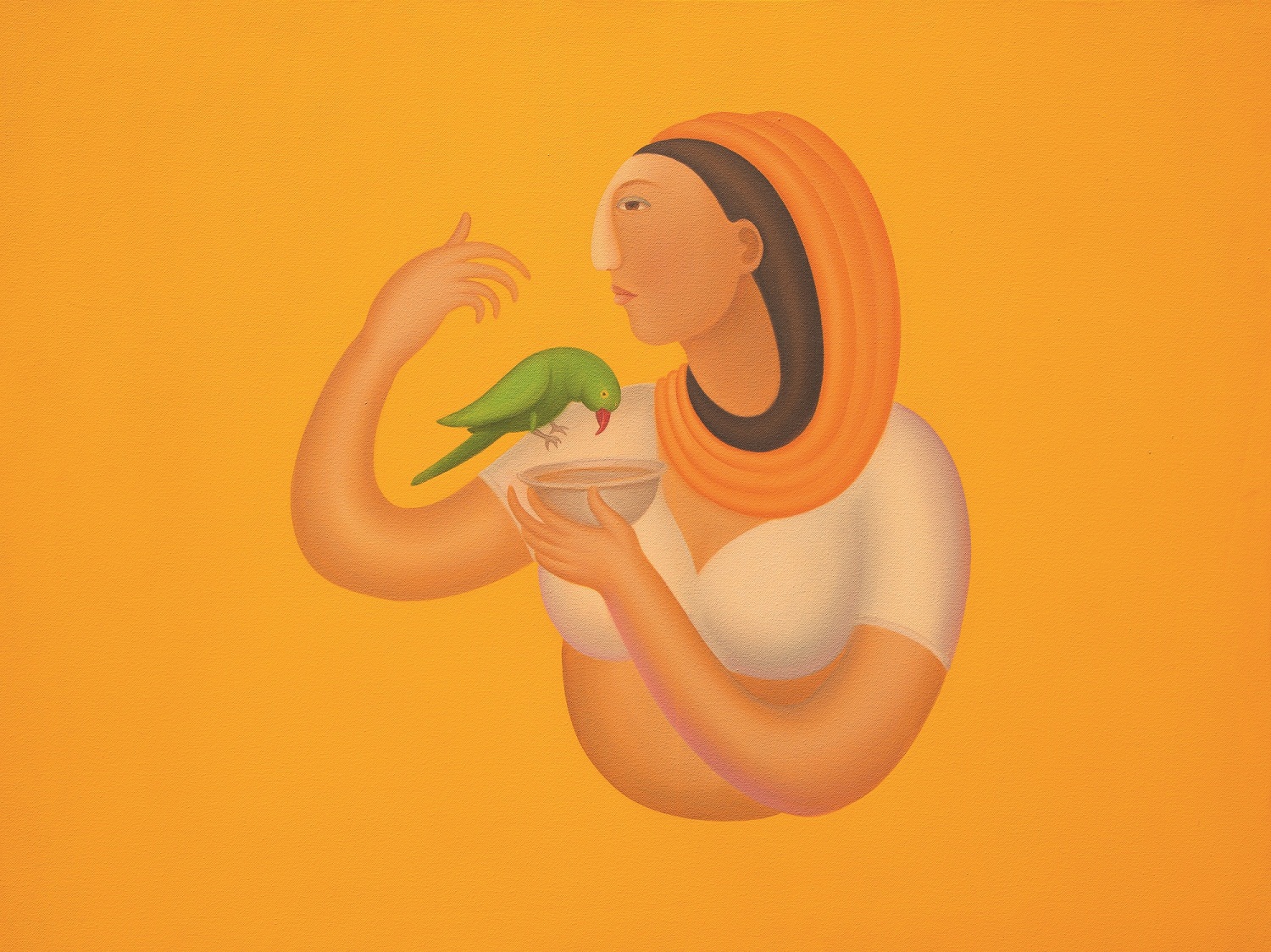 
New Delhi, 14th October 2019 - The twentieth auction by Bid & Hammer is being lead by paintings from Manjit Bawa, M.F Husain, J. Swaminathan, V.S Gaitonde, F. N Souza, N.S Bendre and also a rare painting attributed to Raja Ravi Varma. Alongside prominent works by these stalwarts of modern Indian art, on offer are rare Tanjore, Kalighat, Murshidabad & Bengal School paintings to compliment the works of important artists Jogen Chowdhury, Ram Kumar, G R Santosh, K K Hebbar and the contemporaries like Thota Vaikuntam, Padmanabh Bendre, Rekha Rao, S G Vasudev, Shobha Broota and G R Iranna amongst others. With a total of 55 lots on offer, the estimates begin from as low as Rs 4,000 going upto Rs 5 crores and as always, the origin and provenance of the works standout with many of them coming as they are from the artists directly and acquired by notable collectors.

The selected highlights being a magnificent oil on canvas by the late Manjit Bawa (1941 – 2008) depicting a ‘Lady with Parrot’ against an ochre background, painted in 1998, reminiscent of his trademark bright Kalighat Patua style compositions. The work is estimated between Rs 90 lakhs – 1.2 crores. Another important work is the from the socially active, first artist-in-residence at the Rashtrapati Bhavan and Rajya Sabha MP Jogen Chowdhury. Titled ‘Abu Ghraib’ and painted in his studio at Shantiniketan in 2005, the name evokes pain, suffering and torture, a distinctive feature of Jogen’s works as he himself suffered the horrors of partition. Drawing parallels between Chowdhury’s works and the oft used quote ‘art is meant to disturb the comforted and comfort the disturbed’, “the relevance of this work is evident in the context of the geo-political happenings in the world in 2005 and demonstrates the strong social connection that Jogen Chowdhury’s drawings carry” says Ankush Dadha, Director, Bid & Hammer. He added “Symbolically, we have two more works executed in 2005 and 2006 respectively, including a watercolour, depicting a theme that is the artists’s trademark.” Estimated between Rs 40 – 50 lakhs, the sheer size of this pastel work on paper, measuring 30 x 85 inches, makes it striking.

Moving on to works by the contemporary artists, Rekha Rao’s tribute to the legendary actress Meena Kumari is captivating. Commenting on the inspiration for this diptych from a sold-out exhibition, Rao said “the time when IPTA (Indian People’s Theatre Association) was active, I sometimes accompanied my father (renowned artist K K Hebbar). It was in one such meeting that I met Meena Kumari the then reigning star of Indian cinema. She was a budding poet. I noticed a strange intense, alabaster, ephemeral quality on her face which was disquieting. That image remained etched in my memory which in a later canvas I translated”. This work is estimated at only Rs 3-5 lakhs and will be a collectors and film-afficionado’s delight.

Making their debut in an auction catalogue are artists Giridhar Gowd and Bharat Thakur. Hailing from Guntur District of Andhra Pradhesh, Gowd’s art speaks for itself. At the heart of his creative endeavour is his engagement with the country’s visual art tradition particularly the murals and miniature paintings. On the other hand, is exponent and for the large part of the last decade a prolific artist who works on a global platform and addresses a multicultural audience. The poem below is the reflection of his thought process in creating this large, colourful yet dark, acrylic on canvas work titled ‘Awash’ estimated at Rs 8 – 10 lakhs.

With a new look bidding software, integrated with the ability to download mobile apps and bid from your phone, the pleasure of viewing the lots online and participating in these auctions from the comfort of your home or office will become easier than before. You can also leave absentee or offline bids.

For details and to register for the auction please visit the website www.bidandhammer.com or download the app ‘Bid & Hammer’ from the Google Playstore or Apple Store.

About Bid&Hammer - Bid & Hammer has established itself as India’s pioneering multi-category auction house and is known to have offered important works by prominent Indian artists such as Raja Ravi Varma, Antonio Xavier Trindade, F N Souza and M F Husain, besides iconic English artists J M W Turner, William Hodges and French illustrator Etienne Drian amongst others. The decorative sections have had works by Rene Lalique, Mappin & Webb, Dan Dailey (Daum) and T Manickam Chetty & Sons to name a few. A traditional bricks and mortar auction house operating out of Bangalore & New Delhi with previews and auctions also held in Chennai and Jodhpur, since their first ‘Floor Auction’ in 2008 they have conducted various ‘Estate Auctions’ and have also conducted ‘Live Online Only’ and ‘Silent Bids’ auctions.