Mushaira on Love Peace and Unity Through Literature 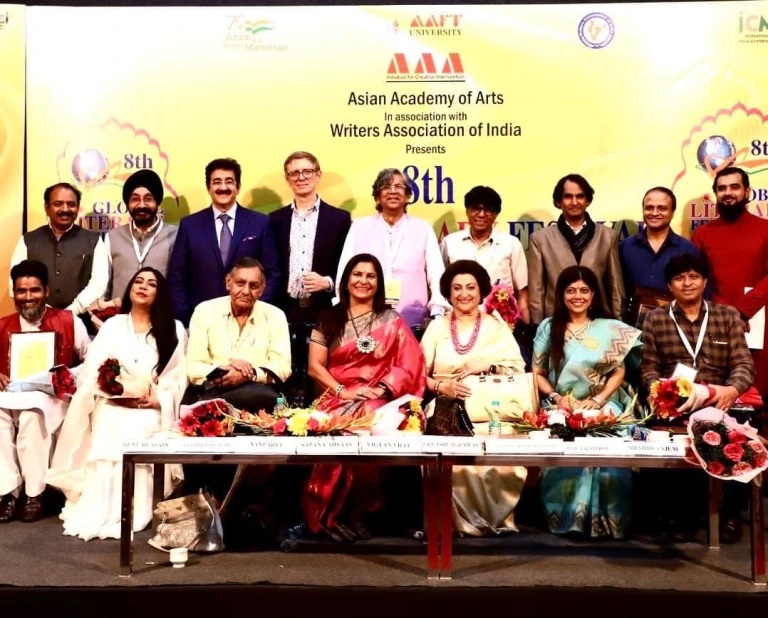 
Noida: To spread the word of Love Peace and Unity -the theme of the festival, a Mushaira was performed during the 8th Global Literary Festival Noida by renowned poets at Marwah Studios which was well attended by the delegates from all over India.

The session started with the release of book titled “Tera Aksh” written by Rahul Rai Gupta which is a compilation of his incomplete thoughts about love and pain. Lakshmi Shankar Bajpai, the former Director General of All India Radio spoke about his contribution in “Tera Aksh” and shared his experiences in the field of radio.

During the event, Sapna Ahsaas through her poetry talked about being positive and added “helping others can bring people closer and can build stronger relationships”. Mala Kapoor said, ”blessings of teachers & elders is the energy to move towards your destination,” She expressed her emotions about life and instances through ghazals and shayari.

Akhtar Azmi captured nostalgic instances through his poetry. His shayari put light on

the importance of memories that one needs to cherish. Urvashi Agarwal Urvi presented the shayari and talked about the fact that despite diversified cultures and traditions, our country stands one and is united for over decades. Surender Shazar, Moin Shadaab, ,Vigyan Vrat, Renu Hussain, Nanparvi, Shahid Anjum, participated in the event and presented beautiful shayari mesmerizing the audience.

The vote of thanks was proposed by the Festival Director Sushil Bharti. The moderators of the event were Urvashi Agarwal ’Urvi’ and Mala Kapoor. Dr. Sandeep Marwah President Marwah Studios gave his closing remarks and also recite poetry related to the theme. Later Marwah presented festival memento to all the poets.


Other articles by USHA