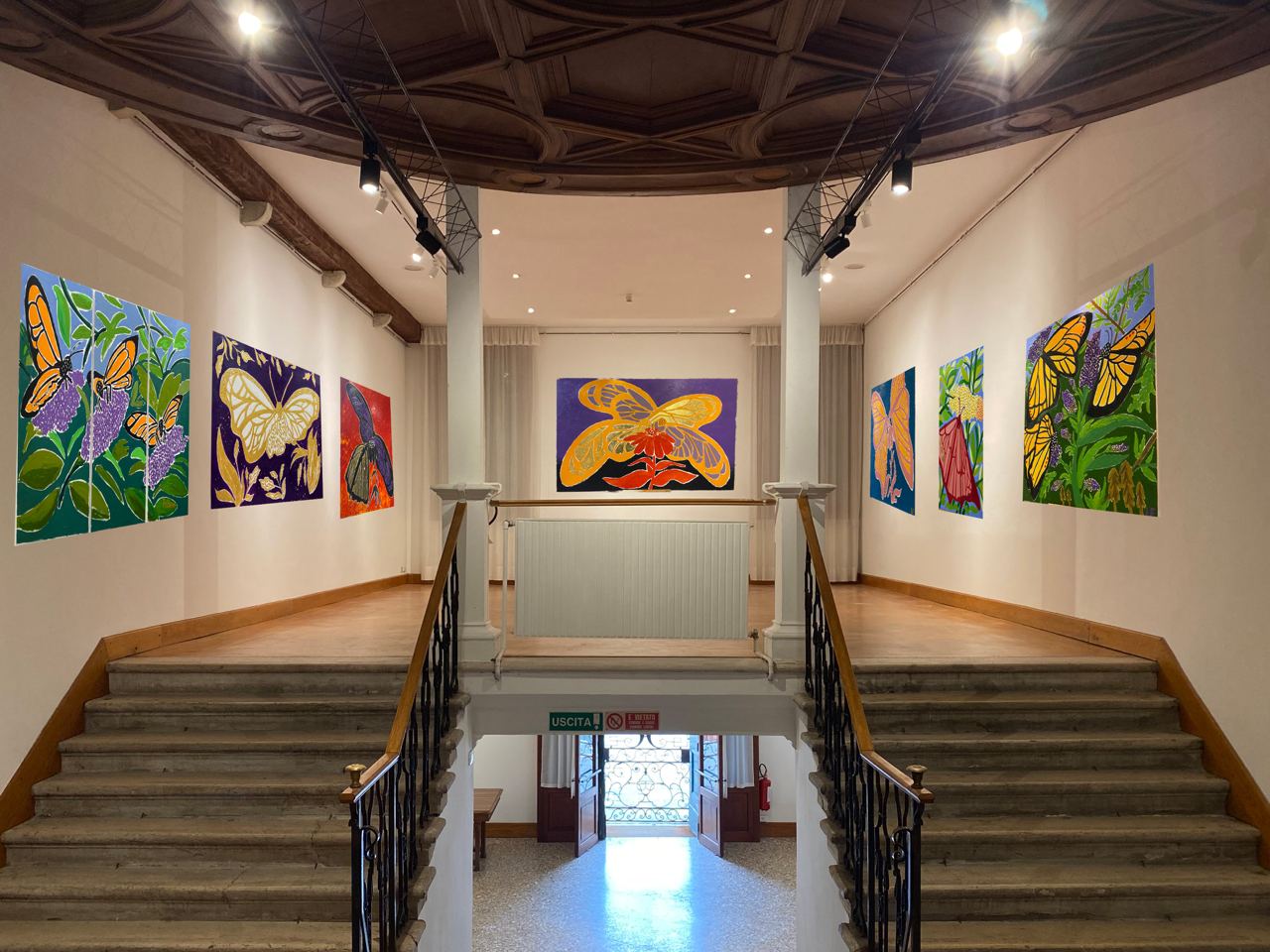 
The stunning nugget artist opens her exhibition in a historic Venetian space - Scoletta dei Battioro e Tiraoro which was the seat of the guild of artisans manufacturing gold threads and leaves. From October, 3 it will be filled with picturesque monarch butterflies. We invite an international audience of art connoisseurs to visit the exhibition, get to know its author and her creative world
How often do you notice butterflies? These unique little creatures. People are more and more preoccupied with their worries, and work, and are endlessly rushing somewhere.
Luda Rodin deliberately shows their beauty on large canvases so that for a moment we become smaller than they are. To notice them. To admire them, to stop, to think about them. Her works reveal the theme of contemplation.
The “Monarch’s Dreams” project is painting research on how the fragility of ecosystems and systems in general, may lead to the dissolution of social relationships and sound reference points and ways. The narrative of this exhibition is set on the problem of the extinction of Monarch butterflies. Their seemingly insignificant role in the ecosystem may soon play a cruel joke on humanity, creating a critical imbalance if the monarchs disappear. This tragic counterpoint is used by the artist to further develop a metaphor for the fragility of various complex systems, which may be destroyed if even the least important link were to be removed.
The famous «Butterfly effect», when some chaotic systems are vulnerable to the smallest influences, can be explained by the example given in Ray Bradbury's story "A Sound of Thunder": as a result of the murder of a butterfly in the Cretaceous period in the United States of the 20th century, another president was elected, and everything went downhill. That's what the Monarch Dreams project is about: minor changes and massive consequences, the beauty and fragility of the Monarch butterflies, and the efforts to create new social ties between various groups.

Luda Rodin – is an emerging self-taught artist and a mother of five children who lives and works in New York. Her main medium is oil on canvas in a large-scale format. Her main field of research is the painting itself, how could we revisit it today and how can we use it to describe people’s emotions and relationships. With her exploration of the naïve method, Luda claims to use an intuitive approach to color, line, and spatial relationships to convey emotions. Her painting tends to be both figurative and abstract in order to give a sense of sincere energy coming through. Her aim is to transform the complexity of the relationships and feelings associated with them into the simplicity of lines and colors.