A Distinguished Speaker Programme was held in hybrid-mode at Symbiosis Law School, Pune 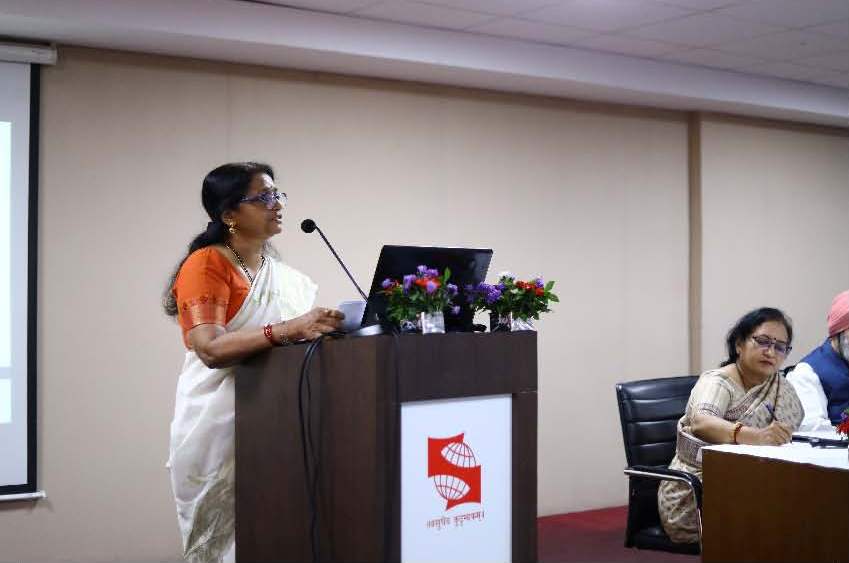 
Symbiosis Law School, Pune, a constituent of Symbiosis International (Deemed University), held a Distinguished Speaker Programme under the aegis of the Jean Monnet Chair for EU Climate Justice Law, Governance, Management and Policy (EUC-LAMP), Co-funded by EU on 22nd August, 2022. It was held in hybrid-mode from PDCLE Hall at 11 AM IST and was streamed live on the Zoom Platform. The lecture was delivered by Ambassador Manjeev Singh Puri,Former Deputy Permanent Representative of India to the UN PMI, Former Ambassador of India to the EU, Belgium, Luxembourg and Nepal on the topic ‘Strategic Nature of Climate Change Negotiation-A Manifestation of Power Play’.

Prof.Dr. Shashikala Gurpur, Fulbright Scholar,Director, Symbiosis Law School, Pune, Dean, Faculty of Law, Symbiosis Law School, Pune, Jean Monnet Chair Professor (EUC-LAMP), Co-funded by Erasmus delivered the welcome address. Dr. Gurpur briefed the audience on the Jean Monnet Distinguished Speaker Program and welcomed and felicitated the Guest Speaker. She mentioned that this was the first fully fledged Internationalization Activity of SLS-Pune, the Jean Monnet Chair being officiated with this event. Introducing the Jean Monnet Chair, Dr. Gurpur noted that it was an achievement for SLS - Pune and Symbiosis International University as it is one among the 30 holders of Jean Monnet Chair across the globe. The main objective of the Chair, or “EU Lamp”according to Dr. Gurpur is to “further dialogue, being a cradle of democracy”. Quoting the Socratic Dialogue, Dr. Gurpur visualized the EU as “an epitome of democracy”. She went on to highlight how the Jean Monnet Chair is particularly relevant for the Indian context by showing how India’s emission owing to its carbon footprint forms a case study to understand and mitigate the risks of climate change. Concluding her address, Dr. Gurpur invited the Guest of Honour to share his valuable insights into active citizenry, democratic participation and civil engagement.

Ambassador Manjeev Singh Puri commenced his address by sharing his past experiences as an Indian Diplomat and Ambassador. He mentioned how the 2004 Kyoto Protocol changed the dynamics of climate change where the “the haves felt challenged by the have nots.”At this juncture, India being a developing country found itself in the hot-waters and was the hegemony of power. According to Mr. Puri, it continues to be an opportunity for India to forge partnerships with the European Union given the current economic and political challenges faced by the EU. He further emphasized on International Law being the“process of furthering national interest which is dependent on domestic laws, nature of its adoption and reception of countries”.Mr. Puri introduced the students to the concept of “Rules-based International Order”,which is privy to the hegemonistic rise of China and the dichotomy of the United States. He went on to note that “International Law is about Hard Power. The countries that have hard power have the most interesting soft power.”

Mr. Puri cited examples of climate negotiations taking a front seat and is now being given the recognition of a magnum that it deserves. In addition to this, he also focused on the emission of Carbon Dioxide becoming an “intergenerational crisis”. Explaining the genesis of Climate Negotiations, Mr. Puri pointed the 1988 Resolution of the United Nations General Assembly setting things in motion for IPCC and Rio De Janeiro Protocol and giving rise to the idea of “common but differentiated liability”. He demonstrated with statistics that even after 30 years of emission policies in place, developed countries such as the United States, United Kingdom and European Union have more per capita emissions compared to developing countries like India and China. Yet, fingers were pointed at India on “phase down of unabated coal”. Concluding his address, Mr. Puri urged the audience to “act on climate change, on both adaptation and mitigation”.

The event was concluded by a Q&A session between the attendees and Mr. Puri and the Vote of Thanks was delivered by Dr. Aparajita Mohanty, Deputy Director (Academics), SLS-P.


Other articles by Symbiosis Law School