Samsung Electronics and Prime Video Bring exclusive 8K and early access content from The Lord of the Rings: The Rings of Power 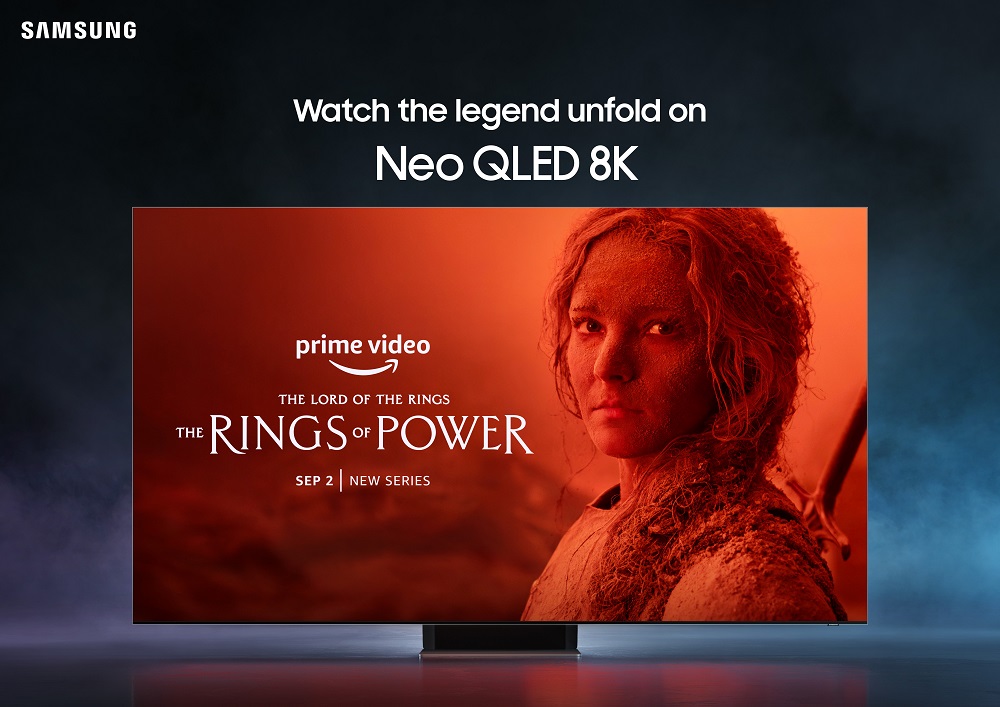 
India – August 30, 2022 – Samsung Electronics Co., Ltd., the world's leading TV manufacturer for 16 consecutive years, today announced a collaboration with Prime Video that offers fans the opportunity to experience exclusive 8K content from the much anticipated The Lord of the Rings: The Rings of Power series only on Samsung’s cutting-edge screens.

Samsung will be the first to offer series content in 8K resolution through a custom sneak peek with exclusive scenes. Viewers will have the opportunity to experience the epic journey in unimaginable depth and detail on Samsung Neo QLED 8K TVs and “The Wall” 8K Micro LED displays. Opportunities for fans to access the exclusive 8K trailer will be announced soon.

“Collaborations such as this mark a major milestone in bringing 8K – the most premium display technology – to the forefront for viewers,” said Simon Sung, Executive Vice President and Head of the Sales & Marketing Team of the Visual Display Business at Samsung Electronics. “For the first time, fans can experience the stunning imagery of The Lord of the Rings: The Rings of Power on Samsung Neo QLED 8K TVs.”

“When considering how to immerse our global fans in the world of The Lord of the Rings: The Rings of Power, Samsung’s exceptional technology and screens felt like a natural fit,” said Andrew Bennett, Vice President of Global Device Partnerships at Prime Video. “Samsung’s depth, detail, and incredible passion for the series has started us on an amazing journey together – one we can't wait for audiences to experience.”

The leader in the development of 8K display technology, Samsung’s Neo QLED 8K series TV’s deliver the most immersive home entertainment experience available today. Whether it’s the stunning vistas of Khazad-Dûm, the majestic forests of the elf-capital Lindon, or the breathtaking island kingdom of Númenor, fans can experience the Second Age of Middle-earth in pristine 8K resolution thanks to Samsung’s Neural Quantum Processor 8K while being enveloped in the action thanks to Dolby Atmos and Object Tracking Sound – a Samsung technology that follows the action on the screen.

About The Lord of the Rings: The Rings of Power

Prime Video's The Lord of the Rings: The Rings of Power brings to screens for the very first time the heroic legends of the fabled Second Age of Middle-earth's history. This epic drama is set thousands of years before the events of J.R.R. Tolkien’s The Hobbit and The Lord of the Rings, and will take viewers back to an era in which great powers were forged, kingdoms rose to glory and fell to ruin, unlikely heroes were tested, hope hung by the finest of threads, and the greatest villain that ever flowed from Tolkien’s pen threatened to cover all the world in darkness. Beginning in a time of relative peace, the series follows an ensemble cast of characters, both familiar and new, as they confront the long-feared re-emergence of evil to Middle-earth. From the darkest depths of the Misty Mountains, to the majestic forests of the elf-capital of Lindon, to the breathtaking island kingdom of Númenor, to the furthest reaches of the map, these kingdoms and characters will carve out legacies that live on long after they are gone.


Other articles by Samsung