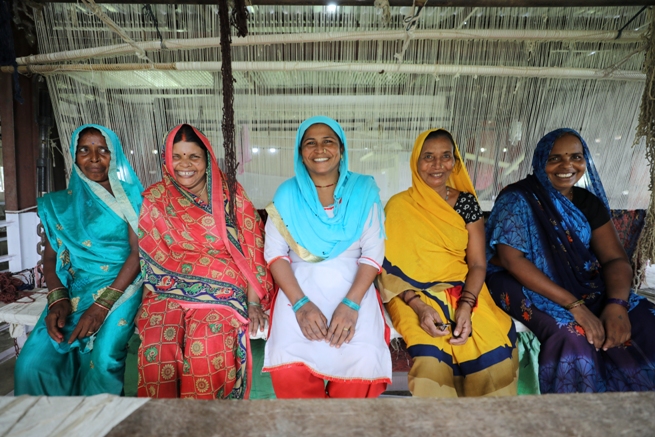 
August 2022, National –Rakshabandhan is no longer a mere tradition that marks the bond between a brother and sister. As time has progressed, the meanings of the tradition have been transformed. The protective bond now manifests itself in a number of ways – siblings, cousins, friends like family and more. OBEETEE, India’s finest luxury carpet maker, aims to highlight one such bond with The Didi Campaign that deserves recognition and something we often overlook– the sisterhood between women.

The Fourth All India Handloom Census, 2019–20, indicates that women comprise of about 72% of the nation's handloom weavers. Today, over 38 million women weave in India. Since they were little girls, women weavers have handled the majority of pre-weaving tasks like setting up the yarn and looms, dyeing and/or tying and dying yarn and fabric, and hand-embroidering clothing since they are from traditional families of handloom weavers in India.

Women in handloom communities end up contributing to the allied labour even if they are not weavers because it involves the entire family. The primary weaver on a handloom needs three auxiliary workers, all of whom generally come from the same family and are women. Thus, each knot tied, and each thread woven is much more than just a craftwork, but also a depiction of solidarity between the women weavers as a collective union. Additionally, each carpet woven by a woman weaver goes to every home as a symbol of affection, respect, and care with likes of Obeetee.

South Asia’s biggest hand-knotted carpet weaving industry hub is located in weaving towns in north-central India. Women are crucial in the creation of handmade rugs and in the development of skilled labour by instructing and guiding young girls in their families and communities. Working together closely from a young age, weaver women develop an unspoken sisterhood towards one another.

Elder weaver women, or Didis, are a glimmer of hope in a desolate world for young girls who lack access to basic education and skills. They help children develop their unique and autonomous identities by providing them with the skills and knowledge they need to thrive in the weaving industry. OBEETEE’S Didi Campaign honours these women weavers' leadership and camaraderie. It is an expansion of the women-weavers initiative, which was launched in 2015.

Since its inception, OBEETEE continually takes initiatives for the upliftment and betterment of weaverfolk and their families. The Didi Campaign is an initiative to tell the world the story of weaver women and their heart-warming bond, while simultaneously giving these talented, inspirational women a voice.

Founded in 1920, OBEETEE is one of the oldest and largest hand-woven rug companies in not only India but also the world. Expanding over a century, OBEETEE has garnered an undisputed reputation in terms of its brilliance. With over 25,000 artisans dedicated to the creation of extraordinary rugs, OBEETEE boasts of a community that sustains its existence and excellence.

The uniqueness and regality of OBEETEE is undeniable, and the Rashtrapati Bhavan, which houses two beautiful OBEETEE creations, is in agreement. In addition to that, innumerable prominent people have experienced and recognized the world of OBEETEE over the years.

OBEETEE has the greatest in-house rug-making capabilities in India, powered by their modern dyeing plant and ever-inspired design department. They constantly employ new textures and designs, and house over 4,000 color-fast shades of wool in their bank. OBEETEE was the first company to receive the SA 8000:2001 certification for Social Accountability. The company does an endless array of things to give back to the community. From supporting children's education, women’s vocational training, public health, and sanitation, to numerous environmentally conscious efforts, OBEETEE is by the people, of the people, for the people.


Other articles by OBEETEE