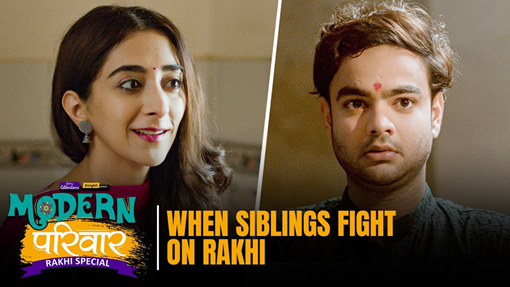 
Delhi, 5th August 2022: Rusk Studios’ premium entertainment vertical Alright today launched the latest installment of their long-running IP, Modern Parivaar, on YouTube, ahead of the festive season of Raksha Bandhan. The Rakhi special taps into the modern brother-sister bond and how the young generation of India navigates the nitty-gritties of familial ties with a good dose of drama and comedy.

Modern Parivaar by Rusk Media and Alright follows the loves and the lives of the Ahujas- a family of modern-day adults and teens who although look like your next-door neighbours but once you get a closer look- you know this family is here for all things drama, entertainment, and fun!

Modern Parivaar’s, Raksha Bandhan special episode is directed by Varun Sobti and written by Pranjal Hooda, Harshpal Singh and Namrata Shenoy. It features Colors TV’s Chak Dhoom Dhoom and Kota Factory fame, Alam Khan, and YouTube personality, Kritika Avasthi. The story of the episode revolves around the relationship between Ekant (brother) and Qismat (sister), Saru (the mother) and Montu (the mama) when suddenly their childhood tantrums surface, on the occasion of Raksha Bandhan.

“With every IP of Alright, we intend to celebrate the many forms of human emotions and connections. Modern Parivaar is one such IP that is built to reflect the nitty-gritties of modern bonds as we navigate through everyday phenomena and topical events like festivities with the Ahujas. In the Rakhi special too, we have closely followed the brother-sister dynamic set against modern times. We strongly believe that our audience will find themselves in Qismat and Ekant and will relate to the emphasises made on togetherness,” says Nilesh Jadhav, AVP Fiction, Rusk Media.