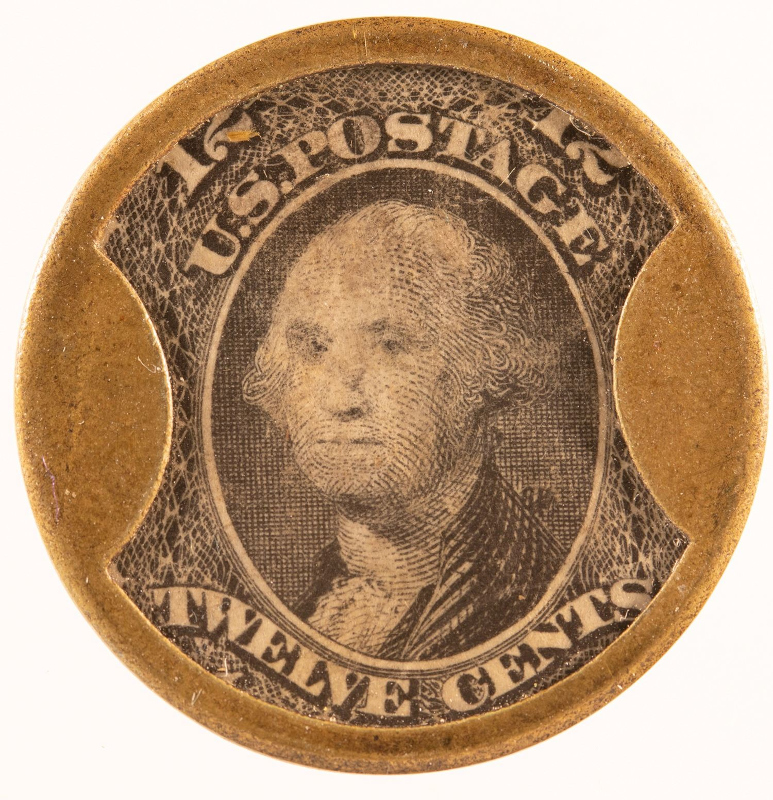 The auction, which was a huge success by any measure and saw new record prices established in numerous collecting categories, was held online and live at Holabird’s gallery in Reno. It was headlined by the collections of Gary Bracken, who collected in a staggering 60-plus categories; and James and Barbara Sherman, whose huge collections were housed in a museum in Tucson.

Hundreds of collectible items – 2,441 lots in all – came up for bid, at price points that appealed to seasoned collectors and novices alike. Internet bidding was facilitated by iCollector.com, LiveAuctioneers.com, Invaluable.com and Auctionzip.com. Phone and left bids were also taken.

The 12-cent stamp was from the Gary Bracken collection. Industry expert David Bowers said of the stamp in 1989, “The 12-cent value is an extreme rarity in the series. Only two specimens can be accounted for presently. It was unknown to specialists until 1939.” The cased stamp was the sale’s top earner. It was graded in Fine/Very Fine condition, despite a little dirt and some crinkle.

The Elfego Baca revolver came out of the James and Barbara Sherman museum collection. The gun was accompanied by a hardcover first-edition copy of the book Law and Order Ltd. The Rousing Life of Elfego Baca by Kyle S. Crichton (1928), autographed by the author and by Baca, whose life as a famous lawman in New Mexico was depicted in a Disney mini-series in 1959-60.

Following are additional highlights from the auction. All prices include the buyer’s premium.

Day 1 of the auction, on Thursday, July 21st, featured 480 lots of philatelic items (to include postcards and postal history, featuring items from the Bracken collection and a collection out of Elcano, Nevada); Express; and stocks and bonds. Over 600 lots came up for bid on the first day.

Day 3, on Saturday, July 23rd, was perhaps the auction’s busiest day. Both the 12-cent stamp and the Elfego Baca revolver were sold on Day 3, which featured numismatic offerings (including currency and scrip, and U.S., ancient and foreign coins – plus medals, badges and exonumia); and tokens, featuring Arizona, Colorado, Nevada, New Mexico and Oklahoma – in all, 622 lots.