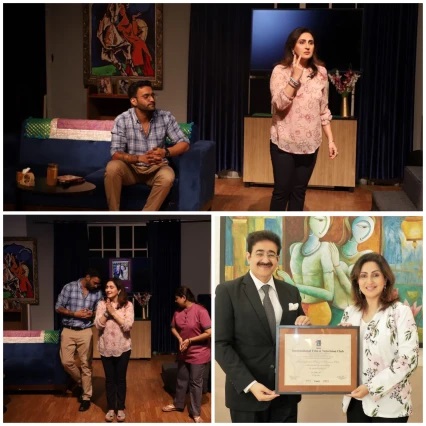 
Noida: Ekjute Theatre Group along with writer & director Juuhi Babbar Sonii comes with the play ” With Love, Aap Ki Saiyaara, to Asian Academy of Film and Television Noida Film City. The play is inspired by a character conceived by Nadira Zaheer Babbar.

‘With Love, Aap ki Saiyaara’ is the story of a passionate, urban and undaunted woman. Through the eyes of a modern Indian woman, Saiyaara dares to dream. She dips into her various emotions, explores her own identity, and emerges. This play explores the episode of a modern woman about her dreams and challenges. Written and performed in form of anecdotes. This play works as a bridge between the present and connects with today’s woman.

“What a play, and what a fabulous performance of the artists especially Juuhi Babbar Sonii, She won the hearts of the audience. I congratulate her and her complete team on the completion of 28 shows of this well-conceived project,” appreciated Dr. Sandeep Marwah President of AAFT.

“Theatre to me is the foundation of all aspects pertaining to the crafts of acting & direction. I have grown up with theatre and theatre artists and actors. After 9 years, coming with a new play is an exhilarating decision because theatre is my deepest passion. The play tells us of a modern woman Saiyaara and her various emotions. Her dreams, challenges, and life can be connected to common present urban women.” said Juuhi Babbar Sonii.