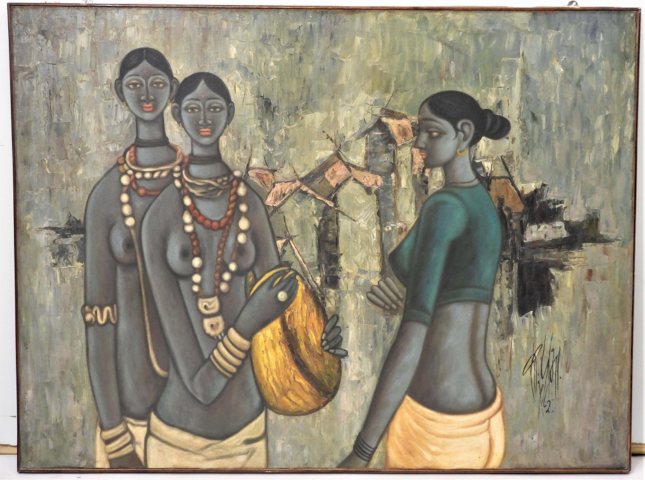 More than just original artwork will come up for bid in the 337-lot auction, which will feature items largely pulled from prominent New England estates. “This auction offers a wide variety of items from Chinese ceramics to numismatics and fine jewelry,” said Travis Landry, a Bruneau & Co. auctioneer and the firm’s Director of Pop Culture. “There is something for nearly everyone.”

Paintings by B. Prabha have been offered before by Bruneau & Co. Auctioneers. In November 2021, a work titled Indian Women Painting sold for $38,750 against an estimate of $15,000-$20,000. B. Prabha entered the fine art world when very few Indian women were involved professionally. She worked on more than 50 exhibitions, both inside and outside of India.

Cotes trained with the portrait painter George Knapton. His early works were often in pencil and pastel, but during the 1760's Cotes began to follow Reynold's portrait style. Cotes helped found the Society of Artists and became its director and was later invited to be one of the Royal Academy's first members. His work can be found in many galleries.

“This auction offers a great selection of 19th and early 20th century American art,” said Kevin Bruneau, the president of Bruneau & Co. Auctioneers and an auctioneer. The Anthony Thieme and Charles Cahoon are my favorites for sure.”

The oil on canvas by Anthony Thieme (Mass./Calif.,1888-1954), titled Buggy Ride, is an Impressionist depiction of a man in a buggy travelling down a dirt path lined by birch trees and autumnal foliage as birds fly about. The 30 inch by 36 inch painting (sight, less frame) is signed “A Thieme” lower left and carries a pre-sale estimate of $2,000-$3,000.

Hire an expert to write a paper for you at writers per hour.
Get your Explainer Video at 100 dollars only Today.
Buy 100% high-quality replica watches with a 2-year warranty and free ground shipping!
To ensure stability and reachability of your applications at all times, remote DDoS protection can keep your hosting services online