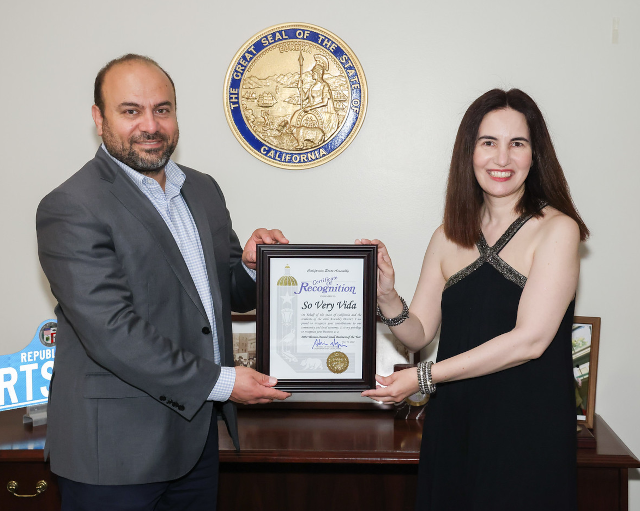 
On Friday, June 17, 2022, actress, voiceover artist, and entrepreneur Vida Ghaffari was awarded with a Certificate of Recognition for her career achievements by California State Assemblymember Adrin Nazarian at his Van Nuys District office. Nazarian represents the 46th California Assembly District, which encompasses the central-southern San Fernando Valley. This was the first in-person event that Nazarian’s office has hosted in over two and a half years due to the pandemic.

“As a local resident and as a fellow Iranian-American, I was truly honored to be bestowed with this certificate by Assemblymember Nazarian who, through a lot of hard work and dedication, has successfully fulfilled the American dream and is someone who is truly devoted to our community,” said Ghaffari.

"Many thanks as well to Saul Mejia for all his hard work on this endeavor and all he does for our community. And big congrats to my fellow awardees," added Ghaffari.

Since his election, Adrin has diligently worked to create educational opportunities for young adults, increase mass transit in the San Fernando Valley, provide smarter management of vital water resources through infrastructure improvements, protect and expand the film industry, and strengthen our infrastructure for much-needed earthquake resiliency. He chairs the Aging and Long-Term Care Committee, as well as the Select Committee on 2028 Olympic and Paralympic Games; he sits on Arts, Entertainment, Sports, Tourism, and Internet Media Committee, Health Committee, Transportation Committee, and Budget Subcommittee No. 4 on State Administration. Adrin was one of the founding members of Generation Next Mentorship program, which worked with local public schools to give young people alternatives to a life of gangs and drugs.

Prior to being elected, he served as Chief of Staff to Paul Krekorian in both Mr. Krekorian’s capacity as Assistant Majority Leader in the California State Legislature and Los Angeles Councilmember. Adrin also served as an aide to Congressman Brad Sherman, participated in the prestigious CORO Fellowship in Public Affairs program, and was appointed as Special Assistant to the California Trade and Commerce Agency by former Governor Gray Davis.

Nazarian attended UCLA, where he received his Bachelor of Arts degree in Economics. He and his wife, Diana, live in West Toluca Lake with their children Alex, David-Beg, and Maggie.

Ghaffari (she/her/hers) has been active on the Tinsel town scene as an award-winning actress, voiceover artist, and entrepreneur. This acting powerhouse is best known for her appearances on the television comedies, Mind of Mencia on Comedy Central, Jimmy Kimmel Live on ABC, and the The Mindy Project formerly on FOX. She was most recently featured in Variety twice for her multi award-winning filmmaker Harley Wallen’s Eternal Code, which she co-starred alongside Scout Taylor-Compton, Richard Tyson, Billy Wirth, Kaiti Wallen and Mel Novak. These projects cap off a number of successes for the versatile starlet. Vida also recently worked with Academy Award nominee Eric Roberts and Scott Schwartz (A Christmas Story) on Space Sharks and wrapped another film with Bai Ling and Tom Sizemore. A noted voiceover artist as well, Vida also has a recurring role in the three-time Peabody award nominated Suspense Show on XM satellite radio. She received her Bachelor of Arts degree in Economics with a minor in Theatre and Journalism at the University of Maryland, College Park.

More info about Vida at http://www.imdb.me/vidaghaffari and on social media at @vidaghaffari