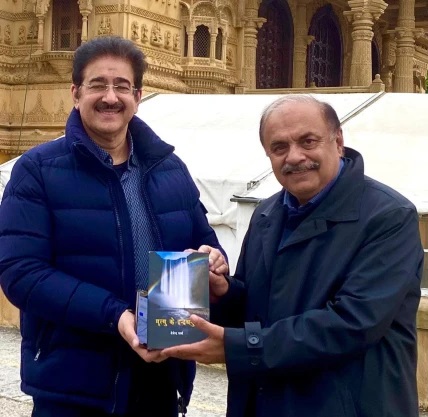 
London: We are more than excited to receive Dr. Sandeep Marwah the Global Cultural Minister and a huge promoter of art and culture in the World. His presence has brought lot of enthusiasm in the London circle of artists especially writers. His contribution is immense in building powerful relation between India and United Kingdom through art and culture,” said Tejinder Sharma renowned writer of United Kingdom.

Tejinder Sharma MBE is a senior Hindi writer and activist in the UK. He is the editor of Purvai Magazine and General Secretary of Katha UK. He has been regularly organizing events at the Nehru Centre and High Commission of India.

Tejinder Sharma was honoured with “The Member of the Order of the British Empire.” He received his award for “Contribution to Hindi Literature and Community Cohesion in the city of London at the hands of Prince Charles in a grand investiture held at the Buckingham Palace. Tejinder Sharma’s name was referred to the Queen by the British Prime Minister Teresa May. He is the first Hindi writer to receive this honour for his contribution to the Hindi Literature.

Tajinder is also the recipient of Atal Bihari Vajpayee National Award for Promotion of Art and Culture from International Chamber of Media and Entertainment Industry. Later Tejinder Sharma presented Dr. Sandeep Marwah with his latest book in Hindi-“Mrityu Ke Indradhanush” as a gesture of goodwill. Indo UK Film and Cultural Forum promised to promote Hindi writing in UK.

Hire an expert to write a paper for you at writers per hour.
To ensure stability and reachability of your applications at all times, remote DDoS protection can keep your hosting services online
Buy 100% high-quality replica watches with a 2-year warranty and free ground shipping!