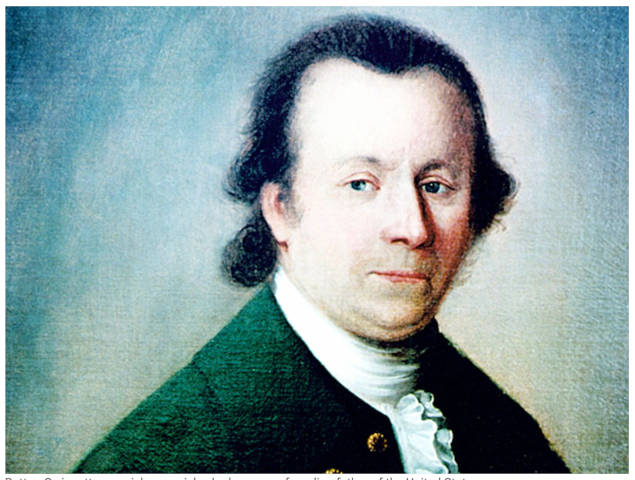 
Wilton, CT, USA, July 01, 2022 -- If the name Button Gwinnett doesn’t ring a bell, you’re in good company, even among many American history buffs. Unremarkable as he was, Gwinnett’s rare signed document accounted for completing an autograph collection of the signatories of the Declaration of Independence that was purchased by dealer John Reznikoff for a record price of $1.4 million.

Gwinnett, a businessman and politician who represented Georgia at the First Continental Congress, was the first of the signatories to die, his passing in 1777 the result of losing a duel less than a year after the Declaration was issued, when he challenged a rival for calling him “a scoundrel and a lying rascal.” The last Button Gwinnett document to sell at auction fetched nearly $700,000 over a decade ago at Sotheby’s.

John Reznikoff, the president of University Archives, purchased the set and immediately placed it with a client. He said that a Gwinnett signature is often the missing piece of the complete 56-signature set, considered a plum among collectors. “Gwinnett was among the least-known of the signers, so relatively few examples, thought to be as few as ten in private hands, were preserved and were not considered to have much value,” Reznikoff said. “Today, a Button is often the jewel that completes the crown, but purchasing one would cost well over one million dollars.”

Reznikoff has sold three complete sets of the signatures and has formed some 20 sets missing only a Button Gwinnett. “Holding these documents in your hand – especially during these incredibly trying times – underscores how it was human beings, special ones and ordinary ones, who formed this nation and how special and ordinary ones could undermine it,” he said.