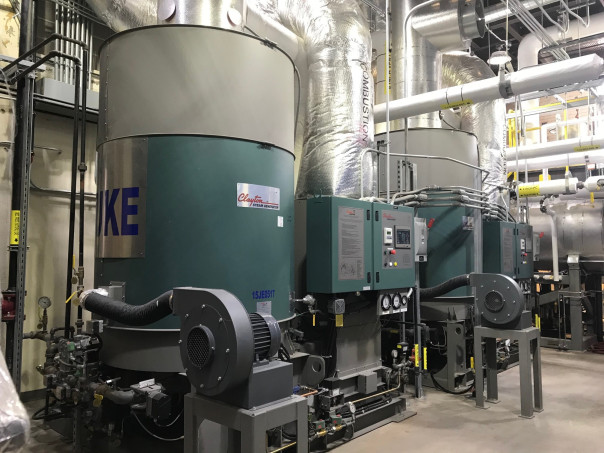 
Los Angeles, CA, USA | May 31, 2022 -- In recent years, Colorado School of Mines (known as Mines) had been purchasing excess steam from the nearby Coors Brewing Company facility to heat their campus. A series of vaults with pipe conduits were built connecting the Coors’ plant to the campus buildings to divert their surplus steam. This arrangement was advantageous to both facilities. Over time, however, the pipe conduits became worn and needed replacing. Mines was faced with a decision: repair the vault infrastructure or invest in a new boiler room. Despite the higher initial cost, it became clear that reinstating their own plant would be more economical overtime. They had been paying Coors approximately $13/1000 Ibs for their steam, whereas the school could produce steam for $7/1000 Ibs by installing two steam generators from Clayton Industries, thus realizing a savings of 38% on their annual energy costs.

The Colorado School of Mines, a public research university focused on environmental science and engineering in Golden, Colorado, had been utilizing steam to heat their campus for a majority of the time, since their inception in 1874.

Yet in recent years, the school had not been using steam from their own boiler room. Instead, they were purchasing steam from the Coors Brewing Company facility down the road. The equation was simple: the Colorado School needed steam, and the Coors facility was creating excess steam. By building a series of vaults with pipe conduits connecting the Coors’ plant to the campus buildings, they could divert their surplus steam to the school – allowing the campus to relinquish their boiler room duties, and Coors to get some extra cash.

It was a symbiotic relationship, while it lasted.

Over time, the pipe conduits within the vaults began to show their age, becoming worn. By April 2015, the wear was sufficient that Colorado School was faced with a decision: put in the money to repair the vault infrastructure or invest in a new boiler room. Despite the higher initial cost, it became clear that reinstating their own plant would be more economical overtime. They had been paying Coors approximately $13/1000 Ibs for their steam, whereas the school could produce steam for $7/1000 Ibs.

The limits of conventional boilers, and the need for supplemental support.

With Colorado’s notoriously cold winters and the school’s sizeable student body, it was clear that Colorado School was going to need conventional boilers to handle the 70,000 pounds per hour (pph) peak loads during the winter months. This is why Legacy Mechanical, the mechanical contractor overseeing the job, obtained two 50k pph conventional steam boilers.

The problem is that these boilers comprise large tanks of water, all of which needs to be heated to make any amount of steam.

RMH group, the design engineering company working on the project, knew of Clayton Industries’ generators and were confident that the Clayton equipment would be able to pick up the slack from the conventional boilers.

Legacy Mechanical purchased two SEOG204-1-FGR steam generators and condensate receiver (CR) feedwater skid package. The plan was to integrate a master lead lag system for the Clayton 200 BHP low NOx steam generators into the boiler plant control master. They would use the two water tube boilers for the base winter loads, and the Clayton generators to handle fluctuations on-demand, as well as the summer loads.

Clayton generators are not like conventional boilers, in that they are not like tea kettles. You don’t have to heat the entire kettle. Instead of heating tanks full of water, these generators create steam by pumping a small amount of water through a coil tube. By using such a low quantity of water, the generators require less energy to operate, and are better able to modulate their steam output to match changing load profiles. One result? Instantaneous, energy-efficient hot showers for all.

Colorado School of Mines is already in talks about a third generator– so they can continue to deliver that reliable, on-demand heat to their faculty and student body as they expand their campus.