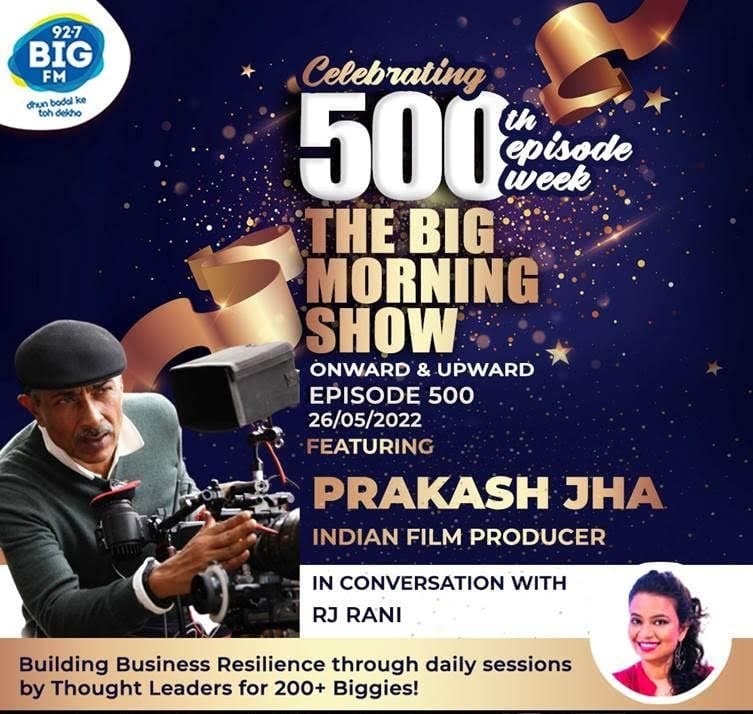 
2nd June, 2022: BIG FM, one of the leading radio stations in the country, creates an industry-first benchmark with its in-house inspirational series, ‘The BIG Morning Show - Onwards & Upwards', completing its 500th phenomenal episode. Making the milestone extra special, National Award-winning filmmaker Prakash Jha, a director par excellence, poured his heart out as the guest. Through thought-provoking conversations by eminent leaders, the brilliant show has positioned itself as a long-term morale booster for the entire BIG FM Family.

Hosted by BIG FM’s RJ Rani, the session was attended by over 300 employees and witnessed an interactive session with the acclaimed director, who talked about all things cinema, his journey in the industry, the tenet of social-political movies, and success of his crime drama series Aashram, with its third season releasing on June 3.

Having been part of the industry for close to four decades, Prakash Jha has worked with some of the biggest names in Bollywood. But there are still some legends who he didn’t get the chance to direct. “Raj Kapoor is the name that comes first to my mind. He loved my film Parinati and told me that he’d want to work with me in the future. I felt that my dream had come true when I heard it. Sadly, that’ll be unfulfilled. Add to that, I wish I’d worked with stalwarts such as Dilip Kumar, Pran and Sanjeev Kumar.”

Touching upon his industrious experience as a filmmaker, Jha said, “The industry used to have a collective conscience which has changed with technological advancement. On the contrary, I’m still inspired by the energy of my youthful days when every day on shoot was the best time ever. I still think that the script is the king. The rest are ornamental. A good script translates to a good movie, but a poor script can’t survive regardless of additional elements.”

“Cinema has always been an outlet of expression for me,” said Jha, while sharing thoughts on how societal atrocities become the hero of his works. “I’ve always had an interest in what’s going on around me. That’s where my stories come from. I don’t think from the viewpoints of good or bad, for I am no one to judge. But things happen for a reason and it’s important to understand it. You learn a lot about society and its character when you see such stories,” Jha said.

Talking about scaling/touching the 500-episode milestone, Abraham Thomas, Chief Executive Officer, Reliance Broadcast Network Limited, said, “We started our BIG Morning Show in March 2020, at the start of the pandemic with a vision to engage and motivate our teams through the sudden changes that we all collectively went through. What started as an engaging morning practice for the BIG employees, gathered a momentum of its own and came about to define the culture of BIG FM of insight based learning and thought leadership. We’re extremely grateful to have had an ace filmmaker such as Prakash Jha to commemorate the show completing 500 episodes. His brand of ‘cinema with power’ fits perfectly in line with BIG FM’s core brand philosophy of driving positive change through purpose-driven and thought-provoking campaigns. We look forward to continuing to engage and inspire our workforce as we move from response and recovery to building a future ready organization.”

Archanaa Singh, Sr. Vice President, Human Resources, BIG FM further added, “We are excited that the show has completed 500 remarkable episodes. We are honoured to have a director such as Prakash Jha to celebrate this special occasion with us. Designed to bring our workforce together during lockdowns, the show has evolved into a guiding light since we began in March 2020. Some of the most eminent names of the industry have inspired the BIG FM family through their vision, learnings and ideas. We thank each one of them for making the show what it is today.”

With an aim to reinforce change and upskill their workforce, the series ‘Onward & Upward - The BIG Morning Show’, has played an instrumental role in bringing about a shift by moving beyond traditional static learning to taking action-oriented perspectives. The channel celebrated its 300th milestone episode with acclaimed filmmaker S.S. Rajamouli as special guest. Over the past two years, it has featured eminent personalities and industry stalwarts from varied sectors like Media & Entertainment, FMCG, Automobile and Advertising amongst others such as N.R. Narayana Murthy & Sudha Murty, Shri. Subhash Chandra, Vidya Balan, Anupam Kher, Remo D’souza, Gajraj Rao, Dr. Rupinder Singh Sodhi, Anurag Basu, Sreeraman Thiagajaran, Vivek Sunder, Ajit Mohan, Ranveer Allahbadia and many others.