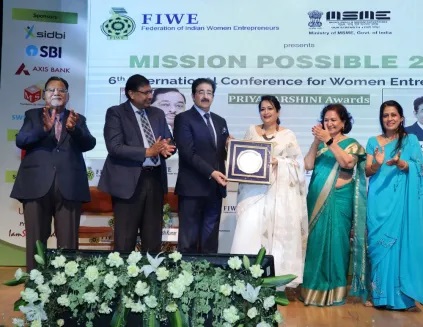 
New Delhi: Federation of Indian Women Entrepreneurs (FIWE), felicitated over 30 women entrepreneurs with the coveted Priyadarshini awards in three different categories. Women entrepreneurs from the remote areas of India, Nepal, Singapore, Bangladesh, Nigeria and Sri Lanka, were applauded for their exemplary achievements. Founded in 1993, FIWE is a national level organization devoted to the entrepreneurship development of women in the country.

Speaking at the occasion, Chief Guest Sandeep Marwah Chancellor AAFT University of Media and Arts said, “Women are endowed with special characteristics like emotion and empathy which makes them superior to Men. They can have a better success ratio than men in any field. It’s a privilege to be honoring women of courage and resilience who have struggled their way to the top”.

“We are glad that we could bring to the fore, success stories of women entrepreneurs from various villages and tribes of India and acknowledge their hard work. Its heartening to witness how each one of them have honed their skills and upgraded their products to meet the market demand, From a mere earning of Rs.2,000 a month, some of them have reached to Rs.50,000”, said Dr. Rajni Aggarwal, President, FIWE