Sandeep Marwah Honored for His Services to Romania 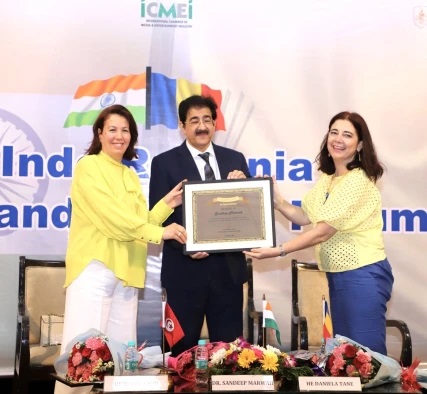 
New Delhi: A well-known film television and media personality Dr. Sandeep Marwah has been honored by the Ambassador of Romania to India H.E. Daniels Mariana Sezonov ?ane during the grand show organised for the screening of Romanian Film Queen Marie of Romania by Indo Romania Film and Cultural Forum at Noida Film City.

Dr. Sandeep Marwah has been serving as the Chair of Indo Romania Film and Cultural Forum from the last six years since its inception, when the forum was created by then the Ambassador of Romania to India H.E. Radu Dobre.

Dr. Sandeep Marwah is the founder of Noida Film City, Marwah Studios, Chancellor of AAFT University of Media and Arts and President of International Chamber of Media and Entertainment Industry.

“It is a great honour to receive an appreciation from the Embassy of Romania, Government of Romania for the humble contribution towards building strong relations between the two countries- India and Romania through art and culture. We have always believed that love peace and unity can be brought to the world through art and culture,” said Dr. Sandeep Marwah receiving the award certificate from the Ambassador.

Ambassador K V Rajan former Secretary Ministry of External Affairs Government of India, H.E. Hayet Talbi Ambassador of Tunisia to India, Alfredo Caldera of Embassy of Venezuela were the guests of honour. The event was attended by large number of ICMEI members , people from film and journalism fraternity and students of AAFT School of Cinema and Journalism.