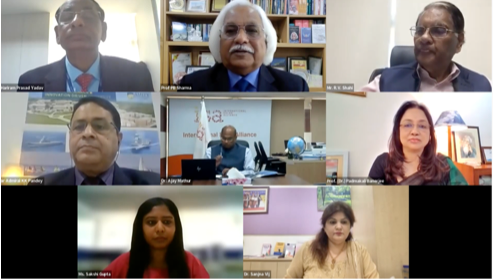 
Gurugram, 6th April 2022: Due to increasing trends of average temperature of air near Earth’s surface, the threat of global warming continues to loom large across the globe. Rapidly developing economies like India are to pay a greater attention to accelerated development and deployment of Green Technologies as an integral part of national development strategies, opined experts at the National Webinar on “Green Technologies for Mitigation of Global Warming and Climate Change” organized by AUH Academic Staff College jointly with Amity School of Engineering and Technology, Amity University Haryana.

Research and Scientific studies have revealed that the global atmosphere concentrations of Carbon Dioxide, (CO2), Methane (CH4) and Nitrous Oxide (N2O) have increased due to anthropogenic activities. These gases are called Green House Gases (GHG’s) and are responsible for increasing global average temperature and cause adverse effect on earth ecosystem. Global warming causes threat of climate change; such as degradation of natural ecosystem, rise of sea level, melting of glacier, abnormal changes in the weather cycle etc. These adversities together impact the country’s food security, water security, energy security and thus the life and livelihood of people. Keeping this in mind Civil Engineering Department of Amity School of Engineering of Technology (ASET) in association with Amity Academic Staff College organized a One -Day national webinar to create awareness amongst students, faculties, stakeholders about the cause of global warming and climate change and an intense urge to mitigate such adverse consequences.

While addressing the gathering Shri R V Shahi, FIE, Chairman, Energy Infratech Private Ltd and former Secretary (Power), Ministry of Power, Government of India said, “When we industrialize, we create toxic greenhouse gases that create the threat for climate change. More advance is the country, more will be the emission of per capita of green-house gases, unless the industrial development is matched by our commitment to develop technologies to mitigate the challenge posed by the greenhouse gases. A sustained focus on clean energy Infratech and green energy technologies is the way forward for a country like ours.”

Dr. Ajay Mathur, Director General, International Solar Alliance explaining the importance of Green Technology said, “We are in a situation of crisis, we need to act and act fast. We should encourage the researchers throughout the world to find the substitute to non-renewable fuels. He emphasized to develop new materials from nano composites.”

“Energy is life, but solar energy is both the source as well as assurance of sustaining life with cheers and happiness around the globe”said Kulpati Prof P B Sharma while welcoming a galaxy of experts and participants at the AUH national webinar. Prof Sharma further reminded that Sun is one such god, revered by Vedic sheers and sages, which never sleeps and is an action 24x7 as it sets in country and rises in another without even a gap of a split second. It is this 24x7 activity of Sun that assures sustenance of life around the globe. Prof Sharma advocated for the establishments of Global Solar Corridor and the International Solar Power Grid to tap the infinite potential of the power of the sun and its abundance of solar energy. He also reminded that the scientists so far have been able to convert solar light into electricity and that too with solar efficiency of the order of 18 percent or so. But in the days ahead the genius of new science and technology innovations shall push the solar power efficiency to a new high of 98%. It, however, requires an intense focus on developing new materials and systems that can convert the entire solar spectrum falling on a solar cell into electricity and also make direct conversion of heat into electricity. India’s scientific community need to be supported for extensive and accelerated R&D through India’s Solar Mission that currently is focusing on deployment of solar cells, imported from countries like China. After all, the solar energy is not just solar light, it has almost 50% or more energy in its solar heat. Thus, alongside the development of new and innovative designs of solar cells, a country like India, where solar heat is in abundance, should focus on its R&D and deployment of solar thermal.

Prof Sharma further reminded the participants about India’s prestigious position in the world community as the 3rd largest renewable energy producer only next to China and USA. We in Amity University Haryana have taken great strides in implementing green technologies in our University Campus that has earned for AUH, Platinum LEED Certification from the US Green Building Council. The universities are to lead by example in respect of water and energy security, effective management of waste and by fostering green technology startups, said Prof Sharma who has also been the President of Association of Indian Universities.

In the opinion of Prof Sharma, the Government of India through UGC should mandate that all large university campuses (50 acres and above) including all the IITs, IISERs, IIITs, NITs and all central universities should be asked to become self sufficient in water and energy to lead by example for attaining the sustainable development goals.

Prof (Dr) Padmakali Banerjee, Pro- Vice Chancellor and Dean Academics, Amity University Haryana stated about 17 SDGs to address the Mission Climate. Further she added that clean energy;such as solar,wind,hydro are playing an important role to reduce emissions of green-house gases. The actionable plans to address the issue;such as role of skill sectors, NISE and other allied organisations need to be energized,she added. She informed that AUH has already signed an MoU with NISE.

Introducing the dignitaries and theme of the webinar, Dr. H R P Yadav, Professor & Head, Civil Engineering Department, Amity School of Engineering and Technology (ASET) informed that due to increase of emissions of green-house gases there is tendency of rise of global average temperature. Due to increase of average temperature of the atmosphere, there is a threat of global warming and as a result of it, there may be adverse effects on natural eco-systems, rise in sea level, melting of glacier, occurrence of floods, damages of agricultural crops; etc. which are the effects of climate change.This climate change causes impacts on country’s food security, water security and energy security.Dr Yadav also highlighted various protocols, conventions, COP, actions plan;etc of international as well as national level to address the issue.

Dr Shalini Bhaskar Bajaj, Director, ASET delivered her formal welcome address. While welcoming, she mentioned that climate change is a real global concern and its mitigation through green technologies is necessary.

While delivering vote of thanks Dr SanjnaVij, Program Director, Academic Staff College,Amity University Haryana thanked the learned speakers and panelists for sharing their words of wisdom and insight for rapid development and deployment of Green Technologies and hoped that task of mitigating Global Warming & Climate Change will be addressed seriously, that it so well deserves.