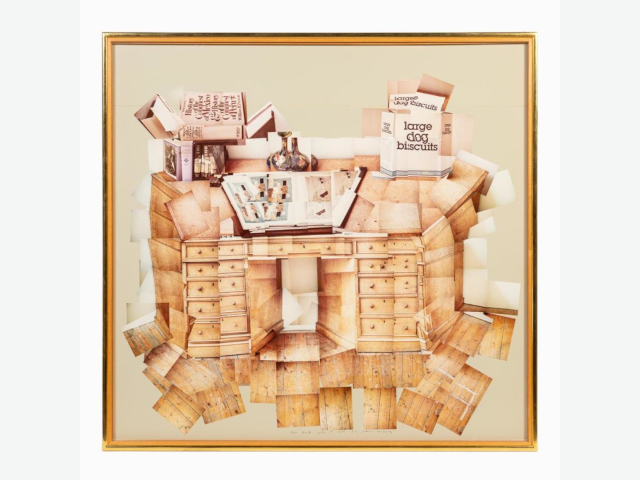 
Atlanta, GA, USA, March 25, 2022 -- A 1984 photographic collage by David Hockney, a monumental 19th century Georgian breakfront and a 17th century landscape attributed to Herman Saftleven are a few of the expected top lots in Ahlers & Ogletree’s two-day, two-session Spring Estates & Collections auction slated for the weekend of April 9-10. Over 1,000 lots will come up for bid.

Also featured will be fine antique rugs, a selection of estate jewelry and watches, examples of design from the mid-20th century, fine art by listed artists, sterling silver and Boston coin silver, period antiques from America, the UK and Europe, and multiple artworks by Marcel Mouly, Nicola Simbari and Dr. Seuss. Start times both days are 10 am Eastern.

There will be no in-person bidding, but bidders can register at one of the three online platforms: LiveAuctioneers.com, Invaluable.com and Bidsquare.com. Phone and absentee bids will also be taken. In-person previews will be held (no appointment required) on Monday, April 4th through April 8th, from 10-5 Eastern, in the Ahlers & Ogletree gallery at 700 Miami Circle in Atlanta.

Session 1, on Saturday, April 9th, will be packed with Asian arts, modern and mid-century art and design, silver and estate jewelry – a total of 507 lots in all. The day’s star lot (in fact the expected star lot of the auction overall) is a photographic collage by British artist David Hockney (b. 1937), depicting a desk with a vase on top, titled The Desk, July 1st (est. $60,000-$80,000).

The collage (or “joiner” as Hockney called it), is titled, dated, signed and numbered (‘8’) from an edition of 20. The work overall is 48 inches tall by 49 inches wide. Hockney is an important contributor to the pop art movement of the 1960s and is considered one of the most influential British artists of the 20th century. His artistic creations are highly sought after by art collectors.

The oil on wood board attributed to Herman Saftleven the Younger is titled Rhenish Landscape with Castle and measures 9 ¾ inches by 11 inches (less frame) (est. $10,000-$20,000). It comes from the estate of a prominent Atlanta businessman and has a provenance tracing it to London and Paris. Saftleven was a Baroque period painter and one of Holland’s best-known artists.

Just a few other Day 2 highlights include the following lots:

Returning to Day 1, there are four artworks in the sale by Marcel Mouly (French,1918-2008). An example is the oil on canvas from 1994 titled Les Voiles, depicting an abstract boat with figures and numerous large, colorful sails against a cobalt sky (est. $5,000-$7,000). The work is artist signed lower right and on verso and overall (with frame) measures 39 ½ inches by 26 ½ inches.

To learn more about Ahlers & Ogletree Auction Gallery and the Spring Estates & Collections auction slated for the weekend of April 9th-10th; or to join their email list for information on upcoming sales, please visit www.aandoauctions.com. Updates are posted often. You can also follow Ahlers & Ogletree through social media on Twitter, Instagram, Pinterest and Facebook.

To ensure stability and reachability of your applications at all times, remote DDoS protection can keep your hosting services online
Hire an expert to write a paper for you at writers per hour.
Buy 100% high-quality replica watches with a 2-year warranty and free ground shipping!