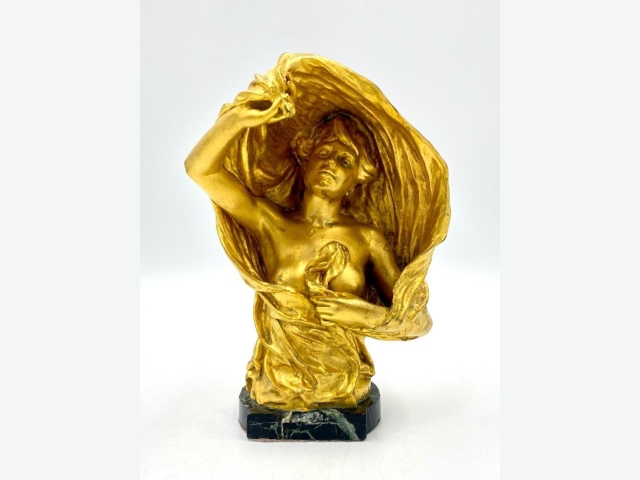 
Beachwood, OH, USA, March 5, 2022 -- A bronze coffee table by Philip and Kelvin LaVerne, titled Eternal Forest, sold for $27,060, and a Soriana leather furniture seating group by Afra and Tobia Scarpa for Cassina brought $15,990 in an online Winter Fine Antiques & Art auction held February 19th by Neue Auctions. They were the two top earners of the more than 300 lots that came up for bid.

The LaVerne coffee table, 47 ½ inches in diameter, was cast with an allover tree pattern patinated in silver, and had a brass and green patina. It was raised on a shaped base and signed by LaVerne, the Mid-Century Modern designers. The Scarpa for Cassina furniture seating group comprised two lounge chairs and two side chairs, made from leather with stainless steel details.

“We had a fabulous auction of fine antiques and art, curated from local estates and collections, and many new record prices were hit all day long,” said Cynthia Maciejewski of Neue Auctions.

She added: “Our next big online auction will focus on English Georgian and Regency furniture, French provincial furniture, rustic wares in pewter and ceramics, Asian art, including a selection of Chinese Export porcelain and China Trade paintings, paperweights, paintings and prints and two bronze sculptures by Frederick William MacMonnies. That will be on Saturday, March 26.”

Following are additional highlights from the auction, which was hosted by LiveAuctioneers.com, Invaluable.com and Bidsquare.com. All prices are inclusive of a 23 percent buyer’s premium.

A pair of face-related lots each posted a selling price of $12,300. One was a screenprint in colors by Tom Wesselmann (American, 1931-2004), titled Bedroom Face with Orange Wallpaper (1987), 62 inches by 68 inches as framed and signed, dated and numbered. The other was a double-handled face flask by R. W. Martin and Brothers (British, 1873-1914), made in 1901 and depicting a grinning character face. The obverse was inscribed with a poem regarding a potter.

Two of the more visually dazzling items in the sale were a bronze kinetic sculpture by Bill Keating (American, b. 1932), titled Dancer, 24 ½ inches tall, signed and dated 1990, with the original sale receipt and brochure ($11,685); and a spectacular Albany of England porcelain, bronze and enamel peacock on a stand, 60 inches in height, the bronze bird brightly glazed in turquoise, cobalt blue and lime green, and the tail spread with fully articulated feathers ($5,842).

In addition to the LaVerne coffee table and Scarpa leather seating group, other furniture lots also did well, to include the following:

- A monumental Art Nouveau marquetry display cabinet, possibly Austrian, with a central unit and two side cabinets fitted as one, plus interior shelves throughout ($4,612).

- A 19th or 20th century baroque style refractory table, the rectangular walnut top raised on a trestle base carved in relief, with shield-shaped cartouches flanked by figures ($4,305).

- Two 18th or 19th century South German or Austrian baroque style cabinets with shaped rectangular tops over a conforming case, with two frieze drawers to each side ($4,305).