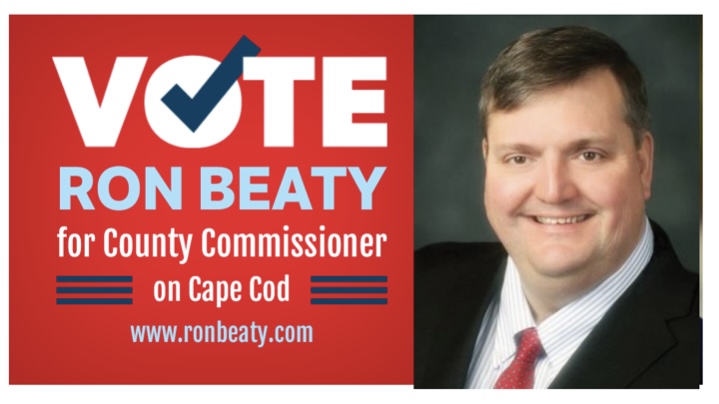 Beaty stated, "I have decided to run as a 2022 Republican Candidate for Barnstable County Commissioner in order to restore some semblance of balance, transparency, and fiscal sanity to our Cape Cod Regional Government."

Candidate Beaty went on, "Additionally, the current 100% progressive Democrat controlled Board of County Commissioners is waging a self-destructive political war with the legislative branch of our county government, the Assembly of Delegates."

Ron Beaty continued, "At present, the County Commissioners have an attorney, and the Assembly of Delegates has an attorney, and they are at complete odds on how to spend $41 million in the federal Covid relief funds. They have made threats against one another about filing lawsuits over the issue. This is not how a regional government should be acting. It should be acting in the best interests of the taxpayers, voters, and citizens of Cape Cod, not as a dysfunctional entity at war with itself."

"As a former county commissioner, I have the requisite experience and qualifications to help set things right with Barnstable County government as well as reign in the excessive out of control spending of the past year, along with putting the brakes on the unnecessary bureaucratic expansion it has undergone." said Mr. Beaty.

Beaty explained, “Cape Cod voters who believe in: Limited Government, Fiscal Responsibility, Lower Taxes, Transparency & Accountability, as well as Protecting the Public Interest, and want to help restore these key principles to our Cape Cod Regional Government should support and elect RON BEATY as their Barnstable County Commissioner! I represent the best opportunity to achieve these objectives in the near future.”

Beaty also mentioned, “Barnstable County Government should be collaborating and partnering with the Conservation Law Foundation rather than being at odds with it about Cape Cod’s ongoing water quality problem!”

Beaty further stated, “Unlike the present Board of County Commissioners, I firmly believe that the Cape Cod Municipal Police Training Academy should be fully supported and responsibly funded to help ensure public safety in our respective Cape communities!”

Beaty also said, "When elected, I will immediately begin to excise the bureaucratic cancer that apparently infests our Barnstable County Government as well as remove the rampant waste, fraud and abuse that has unquestionably become the hallmark of the progressive Democrats currently in control."