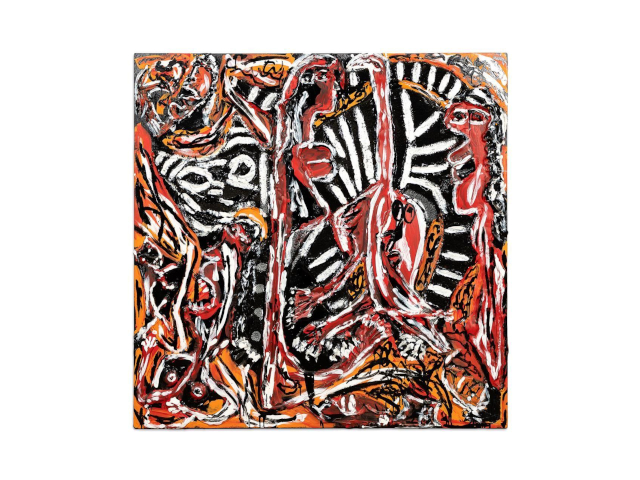 The Thornton Dial painting – full title Struggling Tiger (The Tiger Penned In) – was a paint and mixed media on canvas backed with panel and titled on verso. The 60 inch by 60 inch painting was a spectacular example of Dial’s work. It also marked the fifth highest auction record for a work by Dial and the highest record outside of a New York auction. Dial came into prominence in the 1980s. Ten of his paintings were acquired by the Metropolitan Museum of Art in 2014.

The Tiffany Studios leaded and plated Favrile glass panel in oak door was the auction’s expected top lot, with a robust pre-sale estimate of $50,000-$100,000. It was originally commissioned by Melville Dewey (of the Dewey decimal system) as one of two doors to be installed in the Annie Dewey Memorial Chapel in Lake Placid, New York, in 1923, and dedicated to Dr. W.G. Russell.

It was the left door, showing a female as The Sower. The accompanying right door (not in the auction) depicted a male figure and was titled The Seer, by Grosvenor Dawer, Limited Club Edition #30, with Dewey’s signature. The door in the auction was likely designed by Mary Elizabeth Tillinghast (1845-1912). Overall, it measured 84 inches tall by 42 ¾ inches wide.

Bidders were able to register and bid on one of three online platforms: LiveAuctioneers.com, Invaluable.com and Bidsquare.com. Phone and absentee bids were also accepted. Following are additional highlights from the auction. All prices quoted are inclusive of the buyer’s premium.

A colorless, crystal Lalique center table designed in France by Marc Lalique, of “cactus” form, featuring a round glass top, chrome support and a frosted base, was expected to change hands for $20,000-$30,000, but it hit $36,300. The table had a frosted mark to the foot and measured 60 inches in diameter by 28 ¾ inches in height. Creations by Lalique are highly prized by collectors.