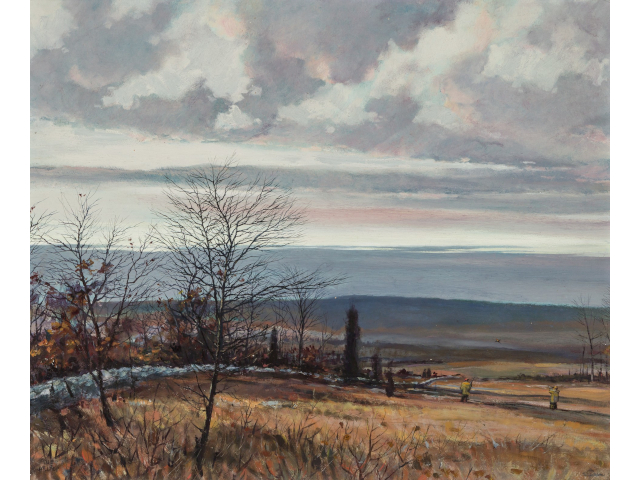 A rare Laura Woodward landscape from a private collection in New England will surely attract interest at an attractive $3,000-$5,000 estimate. There are three works by Jane Peterson, with copies of original receipts from the sale of her estate at O. Rundle Gilbert. Other female artists in the auction include Martha Walter, Olive Parker Black, Juanita Marbrook Guccione and others.

American Impressionism is represented by oils and works on paper by Eric Sloane, two oil paintings by Johann Berthelsen, as well as works by William Chadwick, William Lester Stevens, Thomas Alexander Harrison, Emile Gruppe, Wilson Irvine and many others.

Bronzes by Irish sculptor Patrick O’Reilly, depicting teddy bears as humans in fantastical settings, will lead the sculpture category. There are four O’Reilly bronzes in the auction, each estimated at between $3,000-$7,000. A Jeff Koons Balloon Dog will be offered at $1,000-$2,000 along with other contemporary sculptures by Chaim Gross, Seymour Meyer and Anthony Scott.

Previews will be held by appointment, January 13-19th, weekdays from 11 am to 5 pm Eastern time. Virtual previews and additional photos are available by request. Bidding is available on-line through shannons.com. A live-stream of the auction will be broadcast on shannons.com at 2 pm Eastern on Thursday, January 20th.