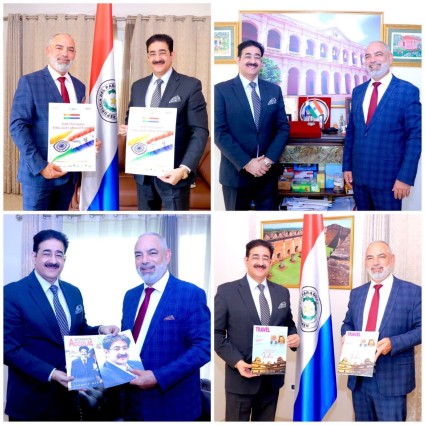 
New Delhi: The International Chamber of Media and Entertainment Industry in association with Embassy of Paraguay launched this morning a new association under the name and banner of Indo Paraguay Film and Cultural Forum to develop and promote relation between two countries through art and culture.

Diplomatic relations between India and Paraguay were established on 13 September 1961. Paraguay opened its embassy in India in March 2006. In May 2012, Fernando Lugo became the first Paraguayan President to visit India. He was accompanied by the Ministers of Foreign Affairs, Agriculture and Animal Husbandry and Commerce, and other senior government officials. Paraguay supported India’s bid for election to the UN Human Rights Council for the term 2015–17. On 30 December 2020, the Union Cabinet of India approved the opening an embassy in Asuncion.

The ceremony took place in the premises of Embassy of Paraguay. ”we are happy to join hands with International Chamber of Media and Entertainment Industry. I know Sandeep Marwah from very long time, now this friendship will grow from here and will go to a new level. I and my Minister of Foreign Affairs are very well aware of cultural diplomacy,” said H.E. Fleming Duarte Ambassador of Paraguay to India while releasing the poster of Indo Paraguay Film and Cultural Forum. Later Sandeep Marwah was nominated as the Chair for Indo Paraguay Film and Cultural Forum.