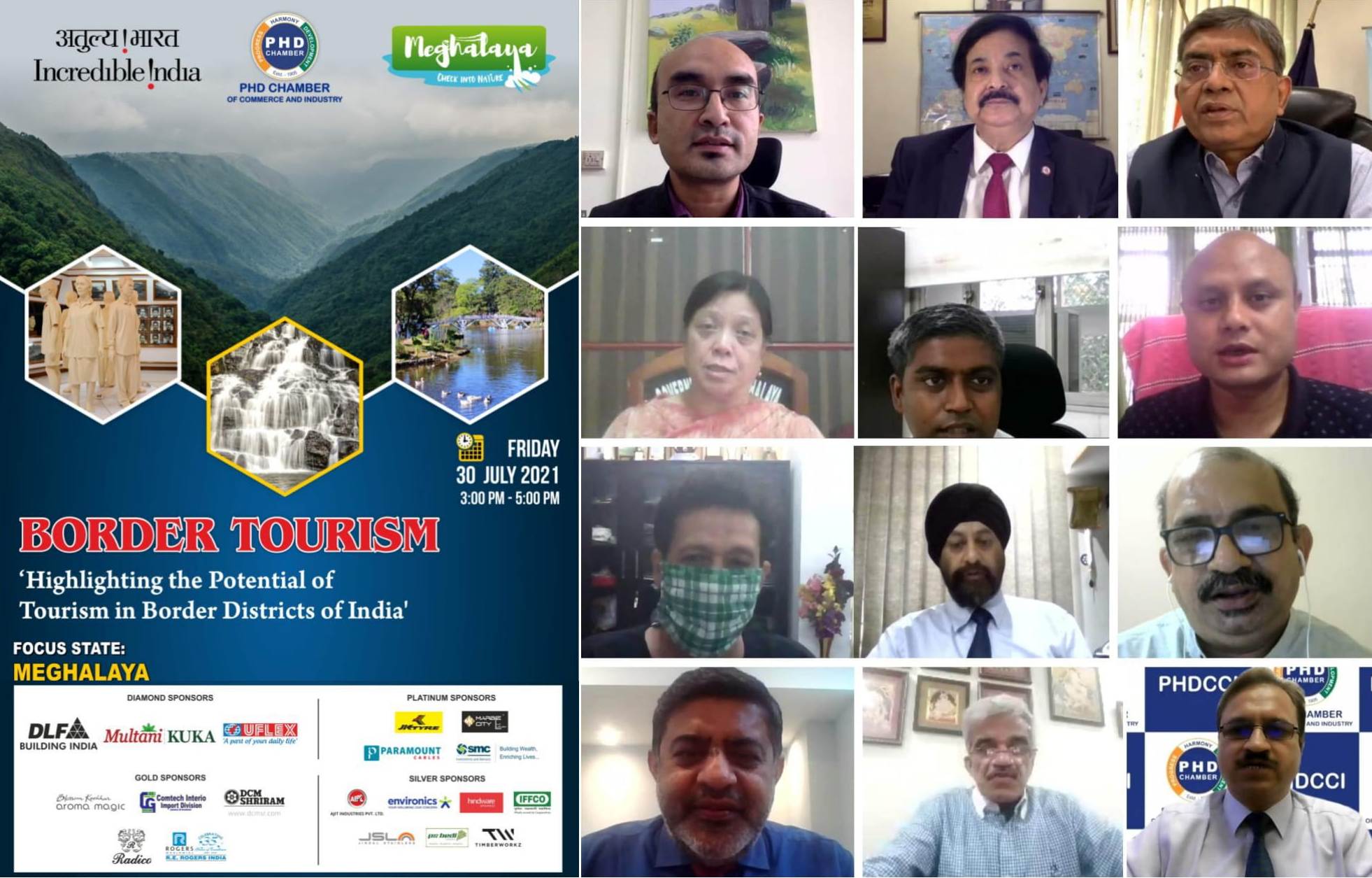 
PHD Chamber of Commerce and Industry (PHDCCI) has launched its Border Tourism Webinar Series with a view to explore the tourism potential in the border districts of India and to create awareness about the lesser-known destinations across the country. The fourth webinar in the series held on 30 July 2021 focused on East Khasi Hills district for the promotion of Border Tourism in Meghalaya.

Delivering the Keynote Address, Mr. Vinod Zutshi (Retd. IAS), Former Secretary – Ministry of Tourism, Government of India, said that Border Tourism has immense potential if promoted and marketed well as it gives an opportunity to see the neighboring countries without actually crossing the border. Campaigns like ‘Dekho Apna Aur Padosi Desh’ can be introduced to promote semi international travel. A national level seminar should be organized by the Ministry of Tourism with all the 18 Border States and UTs to create awareness and buzz about this segment, which will help to increase domestic as well as international tourists.

Mr. Zutshi further said that ease of access to zero line; ensuring last mile connectivity; creating economic activities around border towns will be the key drivers for promoting Border Tourism in Meghalaya. There is a huge potential for promoting Monsoon Tourism in the state as Cherrapunji is known for being the wettest place on Earth. Emphasis should also be given on Festivals and the state government should create a mega Tourism Festival on the lines of Hornbill Festival in Nagaland.

Mr. Cyril V. D. Diengdoh (IAS), Director – Tourism, Government of Meghalaya, said that the state has seen a steady growth of tourist arrivals from Bangladesh over the years with 4,300 arrivals in 2014, which went up to 13,000 in 2018. A MoU has been signed between Tour Operators Association of Meghalaya and Bangladesh Tour Operators Association to promote Mountain to Sea Tourism.

He further mentioned that the tourism department is keen to develop ‘Experiential Eco Tourism’ apart from Adventure Tourism, Rural Tourism and Homestays. In order to enhance the experience of tourists, the state government is following the three fundamentals – right pricing, carrying capacity and zero waste. He also informed that Meghalaya Tourism has come up with a mobile app that provides a one-stop solution to tourists who wish to plan a trip and helps in contactless check-in following the safety protocols.

Ms. Varianarica Syiem (IAS), Director – Border Areas Development Department, Government of Meghalaya, informed that there are 13 border blocks in the state and 435 recognized border villages. In order to ensure ease of movement for the tourists, several projects have been funded under the Border Area Development Programme (BADP) for construction of roads, parking and wayside amenities.

Mr. T. Kabilan (IDAS), Director – North Eastern States, NITI Aayog, informed that the Government is keen on promoting Homestays in the state as that will aid off-beat, experiential tourism in addition to increasing options for the domestic and international tourists. He further said that Tourism has the greatest potential for generating income and employment opportunities and therefore it should be integrated in a manner that the youth in North-East Indian states do not have to move out for livelihood.

Mr. S. S. Dev Barman, Regional Director, India tourism North East, said that the region is endowed with diverse tourist attractions and each state has its own distinct features. Besides having spectacular biodiversity, wildlife, snow-capped Himalayas, tropical forests, shrines of diverse religions and prominent archaeological sites, the Northeast India provides an immense opportunity for Medical Tourism which can attract tourists from the South East Asian countries.

While giving an overview on the East Khasi Hills district, Mr. Alexander S. Mukhim (MCS), Additional Deputy Commissioner, I/c Sohra Civil Sub-Division – East Khasi Hills District, Government of Meghalaya, shared that new tourist sites are being developed in the district and the government has helped in providing support and assistance in the maintenance of these sites.

Mr. Parambir Singh Sehdave, President, Federation of Shillong Hotels, emphasized the need to improve infrastructure, connectivity in the state which will help to double the number of tourists especially from Bangladesh. He also emphasized on the need for tourism education and skill development in the border areas which will help to generate employment.

In his presidential address, Mr. Sanjay Aggarwal, President, PHDCCI, mentioned that the problem of border districts and tourism development is recognized as an important challenge for local communities along the border. Although institutional environment and security barriers remain the stumbling block for entrepreneurial cooperation; conditions for Border Tourism enhancement can be enabled through the setting up of frameworks for easier cooperation of public, private and civil actors.

Mr. Anil Parashar, Chairman – Tourism Committee, PHDCCI, said that Meghalaya has some of the thickest primary forests in the country and therefore constitutes one of the most important eco-tourism circuits in India. He further said that air and road connectivity, infrastructural facilities at tourist sites in terms of accommodation, transport, drinking water, sanitation, healthcare, needs to be addressed. However, all efforts to develop tourism infrastructure have to be done carefully, keeping in mind the fragility of the mountain environment.

Mr. Rajan Sehgal, Co-Chairman – Tourism Committee, PHDCCI delivered the formal vote of thanks and mentioned that PHDCCI will come out with a White Paper after each webinar and the recommendations shall be submitted to the relevant Ministries for their immediate action.

There is no better press release writing company as 123 term papers.
Ged Online
Learn about online entrepreneurship at JohannesLarsson.com