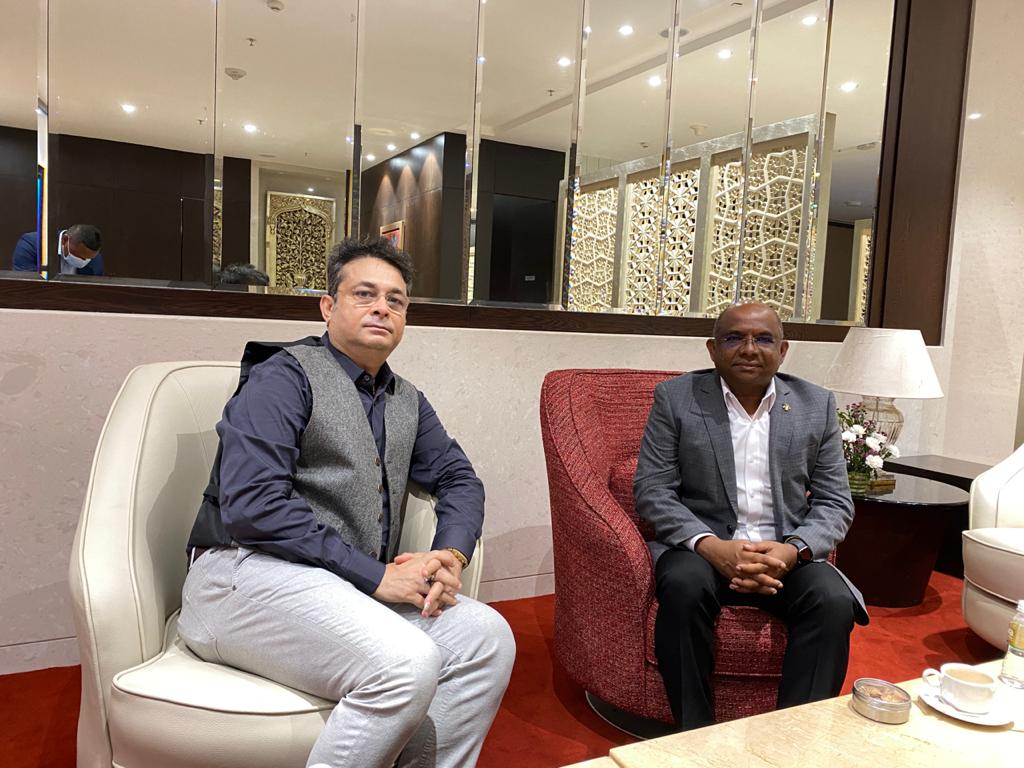 
Mumbai, 25 July 2021: The new President-elect of the United Nationals General Assembly (UNGA) Mr. Abdulla Shahid, Foreign Minister of the Republic of Maldives, along with MP Mr. Hussain Shaheen (Member of the Maldives Parliament) met Mr. Bobby Mohanty, Hon. Consul of the Maldives in Mumbai, on the eve of the Maldives’ Republic Day on 26 July 2021.

Mr. Abdulla Shahid became the President-elect of the 76th session of the UNGA after the elections were held in New York on 7 July 2021. India is the first country that Mr. Abdulla Shahid is visiting after being elected, showing how important India is to the Maldives.

Mr. Mohanty and Mr. Shahid discussed opportunities in the Maldives for Maharashtra around the theme of Falcon Marine exports in areas such as Tuna fishing, luxury resorts and tourism (including medical tourism), culture as well as exchange programs for Maldivian students in India.

Mr. Bobby Mohanty, Honorary Consul (Mumbai), Republic of Maldives, said, “Mr. Abdulla Shahid’s election as UNGA’s President reflects the growing importance of the Maldives on a global stage and his ‘Presidency of Hope’ vision symbolises thecommon aspirations of both India and the Maldives. As part of the joint ‘Neighbourhood First’ common program, the Maldives invites people from Maharashtra and Mumbai to participate in marine, tourism, cultural and student exchange programs.”

The Maldives is planning to attract partners in areas such as core infrastructure, travel, maritime/ marine, education, healthcare, defence, technology and emerging businesses.

Mr. Mohanty had proposed a Tourism Bank in Male by Indian partners for rendering financial services in the entire Indian Ocean Region (IOR).

Indians are the second largest expatriate community in the Maldives. India is the Maldives’ fourth largest trade partner after UAE, China and Singapore. At present, India is developing projects worth $2 billion encompassing social development infrastructure projects.

Mr. Mohanty has been getting Maharashtra government and Mumbai to work closely for the realization of Maldives’ developmental priorities, especially in areas of infrastructure, health-hygiene, connectivity, disaster management and human resources.

Mr. Mohanty has been striving to enhance relations in trade investment and diplomatic ties between the duo in several key areas. Mr. Mohanty believes that the Maldives can also assist in the Sea Plane Project implementation for the states of Gujarat, Maharashtra and Odisha through the Trans Maldivian Airlines for Coastal Tourism project in India.

Indian imports from the Maldives primarily comprise scrap metals while Indian exports to the Maldives include a variety of engineering and industrial products such as drugs and medicines radar apparatus, rock boulders, aggregates, cement and agriculture produce such as rice, spices, fruits, vegetables and poultry produce, etc.

The Maldives opened its doors for India (tourist visa on arrival) and other South Asian countries on 15 July keeping subject to COVID-19 safety protocols.

Mr. Mohanty has a Master’s post-graduation degree of Science & Technology and is an alumnus of IIT (ISM). He has been involved in Philanthropy and Social Activities with his own hard-earned resources through the Bobby Mohanty Foundation Trust (motto is “Serving the needs, Developing through deeds”) since 2004. Mr. Mohanty is involved in social impact initiatives such as serving the rural poor; employment generation and enhancing skill development; women (girl child) empowerment; health, hygiene, sanitation, adult literacy programs for people; sports, education and scholarships for poor students among others. He is the Chairman-Promoter of four private limited profit-making tax compliant companies with Zero Liabilities having offices in Mumbai and abroad. He has recognised experience and expertise in private sector Mining Labour Management & Laws; and International Industrial techno commercial rules and strategy-trade. Mr. Mohanty has been contributing to several charity initiatives in and around Mumbai. He has been working closely with the Maharashtra state government and BrihanMumbai Municipal Corporation for joint socio-economic development programs.