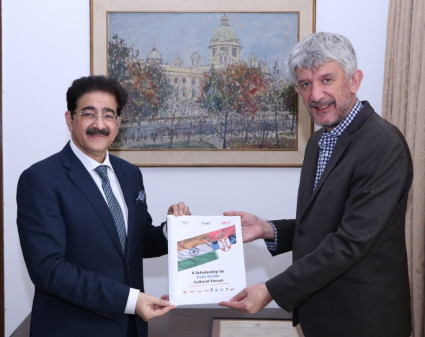 
Noida: As per the MOU Signed between ICMEI and Embassy of Serbia, Dr. Sandeep Marwah President International Chamber of Media And Entertainment Industry presented the scholarship of short-term course of one of the most prestigious institution AAFT-Asian Academy of Film And Television for a deserving student from Serbia other day.

Asian Academy of Film And Television ranks amongst the first ten best film schools of the World. The Scholarship includes the course fee, the production charges, boarding and lodging charges of the student for three months. The student can opt for any of the short term courses designed by AAFT related to films, television, and media.

“I am thankful to ICMEI, Marwah Studios and AAFT for the scholarship to a Serbian student. I am certain that this is a wonderful beginning for a strong and long relationship between two countries,” said H.E. Sinisa Pavic, Charge d’ Affairs, Embassy of Serbia in India.

“It takes time to develop and promote the relation between the two countries. We are trying right at the grass root level. There are many other events which we have lined up with Embassy of Serbia,” said Dr. Sandeep Marwah also Chair for Indo Serbia Film And Cultural Forum while handing over the life membership of International Film And Television Club to the Ambassador. The meeting took place at Embassy of Serbia.

Go to Assignmentgeek.com and get your homework done.
Learn about online entrepreneurship at JohannesLarsson.com