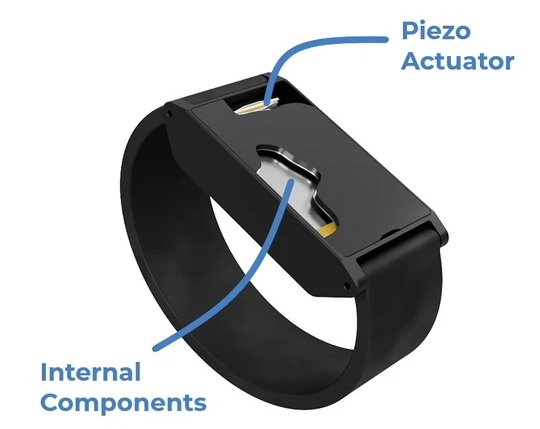 Compared with linear motors (LRA) and rotor motors (ERM), the two traditional technologies that dominate the field of haptic control of wearable devices and other small devices, Boréas piezoelectric haptic motors (Boréas PHE) have made significant progress. The performance of linear motors and rotor motors depends on the size and mass, so we have to choose between size and performance.

If you want high performance, you need a large size, but the space of a small device is limited, and you have to compromise, so you can't get a satisfactory user experience on wearable devices. In contrast, Boréas Piezoelectric Haptic Motor (Boréas PHE) uses only a small piezoelectric actuator and ready-made internal components to achieve excellent tactile performance, avoiding the typical "size-power-performance" compromise issue of linear motors and rotor motors.

"The haptic performance of smartwatches and sports bracelets is critical to user experience. Therefore, choosing a high-quality haptic engine is essential to improve customer satisfaction," said Simon Chaput, founder and CEO of Boréas Technologies "However, the main actuator linear motors and rotor motors usually used in small wearable devices are limited in size. When used in wearable devices, the tactile effect produced is poor, making the device very cheap."

"However, piezoelectric actuators do not have this problem. Our Boréas piezoelectric tactile motor (Boréas PHE) will bring a stronger, more realistic, and more sensitive tactile experience, which will give users a top-level experience beyond expectations. In addition, for those types of equipment where every millimeter and every microamp is important, the small size and ultra-low power consumption can meet all the demanding requirements."


Go beyond linear motors in the field of wearable devices:

Compared with linear motors, the most commonly used haptic technology in wearable devices, the advantages of BPHE are quantifiable.

*Lower power consumption—Compared with linear motors, up to 10 times the power saving efficiency, which can extend battery life.

*Smaller size—BPHE is equipped with a 12×4x1.8mm piezoelectric actuator, which is small enough for devices with limited volume.

Learn about online entrepreneurship at JohannesLarsson.com
There is no better press release writing company as 123 term papers.
Christian Homeschool Online