Sandeep Marwah Honoured for His Contribution to Media 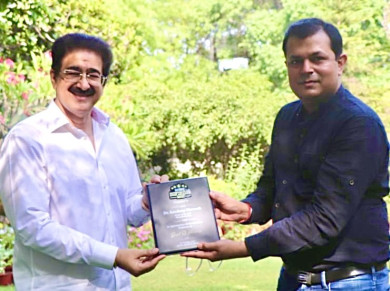 
New Delhi: “The greatest glory in living lies not in never falling, but in rising every time we fall. The future belongs to those who believe in the beauty of their dreams. Even the world’s most successful individuals have experienced their fair share of setbacks and hardships. And there’s much to learn from their challenges as well as their success,” said Dr. Sandeep Marwah President of Marwah Studios while receiving his Entrepreneur’s Star Award curated by SMEBizz for his untiring contribution to films, television, media and education.

Thirty years in studios business, twenty seven in media education Dr. Sandeep Marwah is the founder of Noida Film City and has created seven World Records in media. He is teacher to twenty thousand media professionals from 145 countries of the World. He has been the Chancellor of AAFT University of Media And Arts.

The award ceremony was held at Hotel Pullman, New Delhi. Renowned politician and social worker Shyam Jaju former National Vice President Of BJP was the Chief Guest of the event.

Learn about online entrepreneurship at JohannesLarsson.com
Buy 100% high-quality replica watches with a 2-year warranty and free ground shipping!
Pay someone to write my research paper at Rapidessay