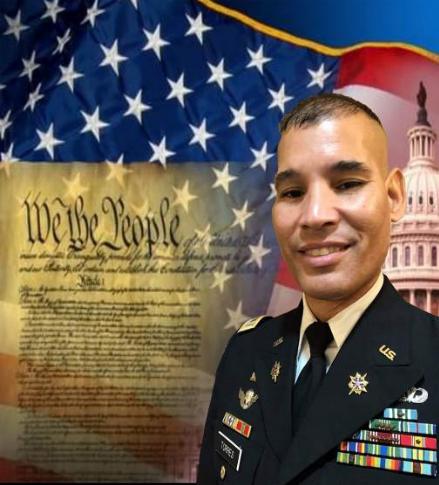 
WOODBRIDGE, VA — As a career citizen soldier for our great country, 2024 Presidential Candidate Jesus B. Torres (who goes by Jay) is keenly aware of the damage public corruption inflicts on our democracy. The sense of betrayal undermines the faith in our great system, which is nothing without the support of the people. Candidate Torres will work hard to repair the damage done to our democracy by years of broken promises.

Even during his teenage years, Jay viewed himself as a leader. Of Puerto Rican descent, but raised in Brooklyn, New York, he attended high school within the tough neighborhood known as Bushwick. Jay enlisted into the U.S. Army in 1992 hoping to further his education, acquire additional skills, and see what else lied beyond the big city. Rising through the military ranks, Jay excelled in a myriad of demanding assignments and posts. Jay volunteered for and completed various arduous military training/schools to include Mountaineering and Rappelling School, Recruiting, and Airborne School. In 2008, Jay pushed himself further as he shed his administrative Non-Commissioned Officer role to become a commissioned Warrant Officer in the U.S. Army. During his last decade of service before retiring in 2016, Jay worked along-side numerous government agencies while assigned at American Embassies in four distinctly different geographic regions. Now in his post-military career, Jay continues to serve his country with a support role within the intelligence community.

Jay’s vision of a GOP for the new era (deemed the New GOP) continues to gain support and momentum as his ideas reach further into the mainstream. With a strong sense of optimism, and a stance as an authentic commoner, Jay provides a fresh stance on issues that 328 million Americans can relate to. Jay’s platform provides a slew of issues that have meagerly been dealt with in the past 5 presidencies including tackling human trafficking, climate change, a push for a living wage, student loan forgiveness, affordable prescription drugs, a return to American manufacturing, and social-economic issues. Jay’s bold stance would support statehood for our Capitol as well as a look at our common-wealth and territories also becoming states. Jay supports strong diplomacy, secure borders and a structured pathway for citizenship. As a constitutionalist, Jay will defend our constitutional rights and bring in a much-needed New GOP. Jay and his wife Sotheary (of Cambodia) reside with their children in Woodbridge, VA. Jay is definitive proof that a person can overcome many obstacles in life, including tragedy - yet still rise to lead and encourage others.

WELCOME TO THE NEW GOP GOVERNMENT OF THE PEOPLE