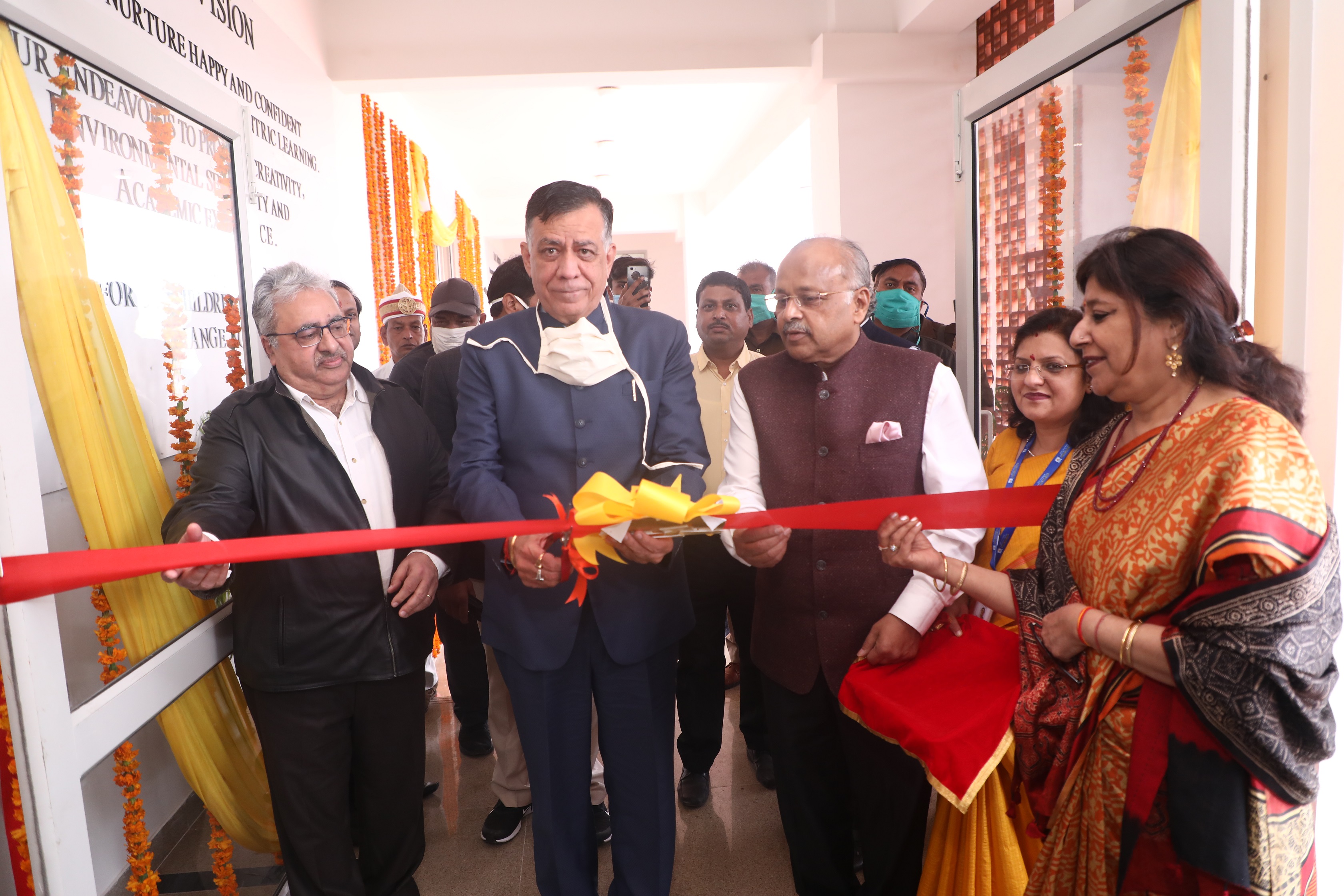 The inauguration happened in the presence of the Chief Guest, Satish Mahana, Minister of Industrial Development, Government of UP. The Guest of Honour was Smt. Suniti Devi Jaipuria, who did the virtual inauguration of the new phase 2 building called Senior Block.

The ceremony began at 11am with the lighting of the lamp and a Saraswati Vandana by the students of the school. The prayer was quite apt, considering that the inauguration happened on the occasion of Vasant Panchami, which is the day of worshipping Goddess Saraswati – the goddess of knowledge, learning, music and arts.

Talking about the new building, Shishir Jaipuria added, “A lot of thinking and brainstorming has gone into conceptualizing and designing this new building. We had a vision of creating a world-class teaching-learning facility, and those of you who have seen and taken a tour of the building, will agree that this is a world-class infrastructure, with facilities that have placed our Lucknow school in a different league altogether.”

The chairman’s address was followed by a virtual walk-through video highlighting the facilities of the new building. The new building is twice the size of the old one and has a capacity of 1500 students. It has an indoor swimming pool, a badminton court, a taekwondo arena, a shooting and archery range, a gymnasium, a computer and robotics lab, a music and dance room, a radio jockey room, a film-making and editing studio, a science laboratory, and a well-stocked library.

The school’s principal, Poonam Kochitty, in her address, reminisced the achievements of the school in the last five years. She said, “The school was founded in April 2016, and since then we have achieved much. I’m happy and proud to let you know that 39 teachers of the Lucknow school have been certified Microsoft Innovative Educators Experts and five have reached the level-one of Adobe Certified Educators. We are the only Microsoft Certified Showcase School in the city of Lucknow for the closing academic year.”

The students of the school added a dash of entertainment to the inauguration ceremony with a lively cultural performance. The ceremony’s Chief Guest, Satish Mahana, had a word of praise for the facilities in the new building of Seth Anandram Jaipuria School, Lucknow. He said, “I congratulate Shishir Jaipuria ji and the school faculty on the inauguration of this impressive new building. I’m sure that Seth Anandram Jaipuria Group will continue to provide quality education in Uttar Pradesh.”

The inaugural function was attended by a select group of staff, students, parents and media persons. All of them had to observe social distancing norms. The ceremony concluded with a vote of thanks by the school’s headmistress.

Seth Anandram Jaipuria Group currently runs twelve K-12 schools, five pre-schools, two business management institutes, a teacher’s training institute in northern India and a degree college in Kolkata. The group has a broad base of more than 20,000 alumni and 15,000 students. The group’s schools have created a niche position especially in the K-12 domain.

Buy 100% high-quality replica watches with a 2-year warranty and free ground shipping!
To ensure stability and reachability of your applications at all times, remote DDoS protection can keep your hosting services online
Go to Assignmentgeek.com and get your homework done.
Pay someone to write my research paper at Rapidessay
Ged Online