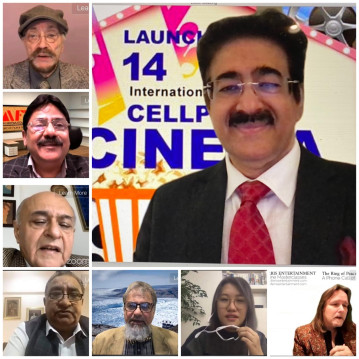 
New Delhi: “Today we are breaking our own record of launching the 14th edition of International Festival of Cellphone Cinema 2021. IFCPC now is the oldest festival in the World for mobile films. Around 14 years back we shot the first full length film with mobile in association with Karl Bardosh of New York University. Half of the film was shot in New York and half in Noida. People were amazed to see the magic of mobile phone,” initiated Dr. Sandeep Marwah of Marwah Studios & President of the 14th IFCPC Festival.

“Large cinema equipment including track trolley, crane, stands, lights etc. overshadowed the tiny little camera at different locations in Noida and New York forced people to watch the shooting in the most mysterious conditions,” recollected Prof. Karl Bardosh. “Not many people could appreciate the new way of film making that time. Table has been turned now. Everyone wants to make a film with mobile,” added Prof. Karl Bardosh Master Professor in Cinema at Tisch School of Arts New York University, USA.

“I appreciate the 14 years partnership of Karl and Sandeep in promoting Mobile Cinema all over the World. They have been titled as Fathers of Cellphone Cinema. They are ones who have started mobile festival at Cannes, Hungary after India and USA. It is now the subject in New York University. Mobile has created many new film makers and has been an instrument not only in learning cinema but films are shot on mobile,” said Prof. Peter Terezakis of New York University, USA.

“I have finished my full-length feature film on mobile. You get best results and can be expanded for large screen. It is best for OTT channel and short films and message-oriented films can do wonders on you tube and other social media,” added Minah Raine Jung Film Producer from USA.

“It is an age of Mobile films. During Pandemic the usage of Mobile was at its peak. The World has been informed and entertained by short films made by mobile and delivered on mobile. I am happy I am teaching mobile cinema and creating some mobile films too. It is a great pleasure to be associated with fathers of mobile cinema karl an Sandeep in USA and India,” said Peter Ferris of Ferris Entertainment, London, United Kingdom.

“This is a wonderful way for young film makers to come forward and express themselves to the film fraternity. There is a need as well as demand for short films, music videos and ample platforms to showcase your talent,” said Amit Khanna renowned film maker from Mumbai.

To ensure stability and reachability of your applications at all times, remote DDoS protection can keep your hosting services online
Essaysmatch cheap essay writing service