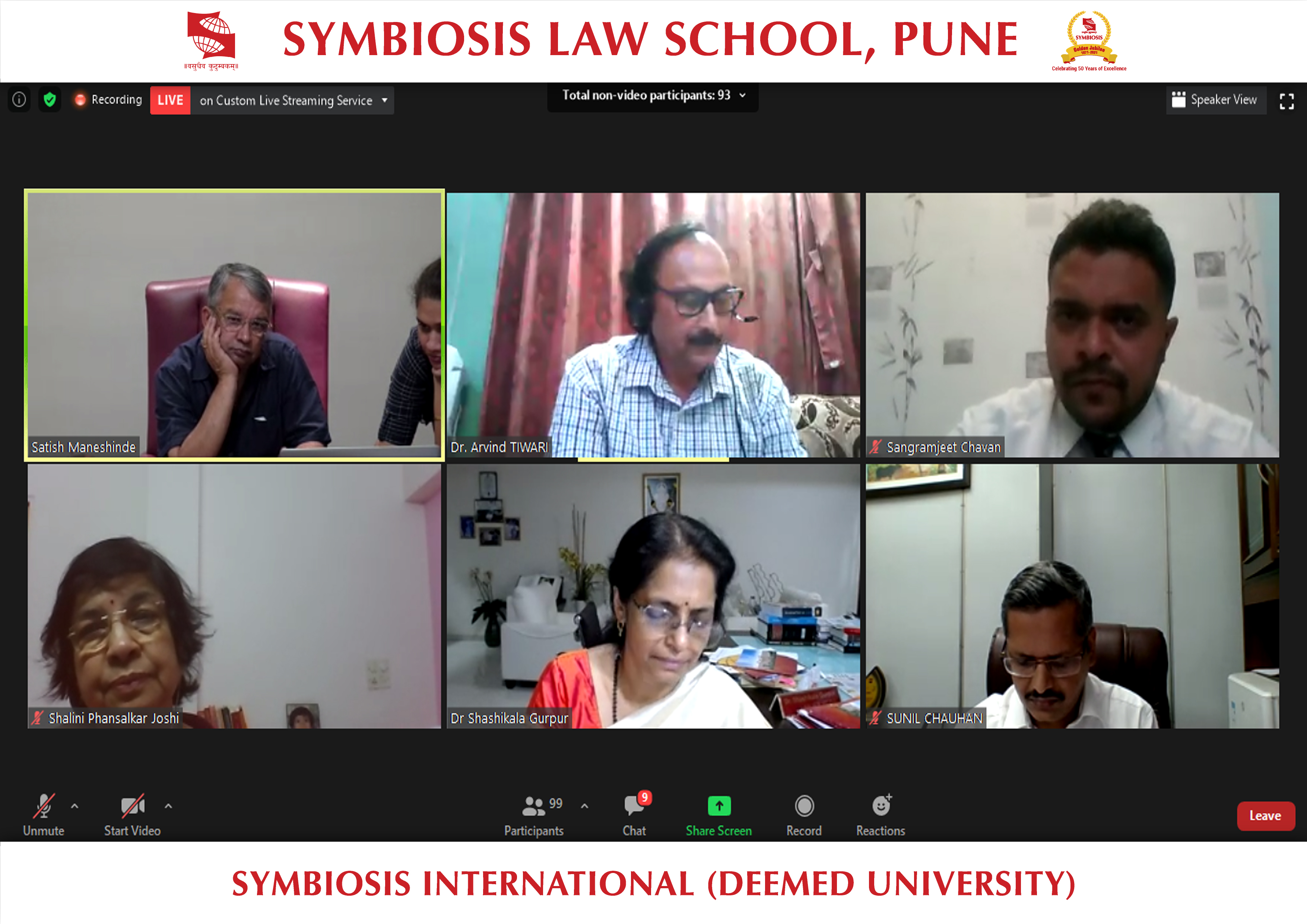 The Government of India aims to make fundamental changes to the Indian Criminal Law framework and Criminal Justice System, in order to make it more accessible, affordable and citizen-centric. The Ministry of Home Affairs, Government of India, has therefore invited Symbiosis Law School, Pune, to engage in research cum public consultation to review the criminal laws of the country and bring forth the necessary recommendations by engaging the public to improve them. In furtherance of the same, a team of Symbiosis Law School, Pune reviewed the relevant literature and collected data from more than 120 stakeholders including Judges, Lawyers, Academicians, Police, third gender, psychologist, researchers, experts, forensic officers, paralegal volunteers, journalists, social workers, sociologist, accused/suspects, victims and Prison Officials, in order to understand the gaps of the Criminal Legal Justice System.

The first panel was moderated by Dr. Shashikala Gurpur and co-moderated by Dr. Atmaram Shelke, Assistant Professor, SLS-P. The Panel discussed on the topic, ‘Improving the Conviction Rates by Coordination between Police Officials and Public Prosecutors’, and consisted of Adv. Ujjwal Nikam, Special Public Prosecutor; Adv. S.K. Jain, Advocate; Adv. Hitesh Jain Advocate; Mr. Bhanupratap Barge, Rtd. ATS Officer; and Mr. Rohit Athavale, Journalist, Maharashtra Times. Adv. Ujjwal Nikam commenced the Panel Discussion cum Public Consultation and spoke of his personal experience and the lack of coordination between investigative agencies and public prosecutors. Adv. Hitesh Jain recalled the Malimath Committee Report and its recommendations to establish a Director of Prosecution in every state, who will review all prosecution. Mr. Bhanupratap Barge, a former ATS Officer, spoke of the difficulties faced on the investigative side of criminal cases. Adv. S.K. Jain pointed out the implications of a media trial and how measures should be undertaken on the part of the prosecution to prevent the same.

The second panel was moderated by Dr. Shashikala Gurpur and co-moderated by Prof. Shirish Kulkarni, Assistant Professor, SLS-P. The panel discussed the topic, ‘Providing Witness Protection’, and consisted of Justice (Retd.) Dr. Shalini Phansalkar Joshi, BombayHigh Court; Mr. Alok Agarwal, Research and Policy Advisor, NALSA; Adv. Latika Salgoankar, Academician and Advocate; Dr Harish Shetty, Psychiatrist; Adv. Hitesh. Jain, Bombay High court; and Mr. Bhanupratap Barge, Retd. ATS Officer. Dr. Shalini Joshi asserted that witnesses deserve a standard of dignified treatment without being thought of as simply a means to an end. Mr. Alok Agarwal recommended the system of providing definite time slots when the witnesses need to come in. Adv. Latika Salgaonkar further provided a psychological viewpoint explaining that most people refuse to be witnesses because they fear harassment, long hours and maybe even abuse. Dr. Harish Shetty statedthat there needs to be an “emotional arbiter” who can protect the emotional health of witnesses, which will go a long way in increasing the efficacy of physical protection as well. Mr. Bhanupratap Barge commented that the duty of witness protection should be equally shared between the Government as well as the Police in order to ensure the highest standard of security. Adv. Hitesh Jain highlighted an important point of lack of awareness of such provisions of protection. Therefore, he opined more emphasis should be placed on increasing awareness which ensures human rights of these witnesses.

The third panel was moderated by Dr. Shashikala Gurpur and co-moderated by Ms. Chaitraly Deshmukh, Journalist and Visiting Faculty (SLS-P). The Panel discussed the topic, ‘Advancing Victim Protection and Rehabilitation’, and consisted of Justice (Retd.) Dr. Shalini Phansalkar Joshi, Bombay High Court; Dr. S.C. Raina, Vice Chancellor, HPNLU, Simla; Adv. S. K. Jain, Advocate; Mr. Sunil Chauhan, Director, NALSA; Dr Harish Shetty, Psychiatrist; and Adv. Latika Salgoankar, Academician and Advocate. Former Judge Phansalkar pointed that more awareness has to be created in the legal system regarding the rules of payment of compensation, even if the Court does not take suo-moto action. Dr. Raina expressed his dismayupon the lack of rehabilitation for victims in India’s criminal justice system and argued for a proper calculation of compensation. Adv. Jain spoke next about the requirement of a scientific metric for calculation of compensation for each victim, instead of the arbitrary system India has in place. Adv.Sunil Chauhan spoke about how the current process of the payment of compensation being in the hands of the Executive and the District Legal Services together, leads to massive delays in the payment of compensation to the victims, and suggested amendments to this process. As part of her final statements, Dr. Latika emphasised on the role of compensation as not just being a remedy for the victims, but also an acknowledgement of wrong and inability of the state to perform its duty.

The fourth panel was moderated by Dr. Shashikala Gurpur and co-moderated by Dr. Ashish Deshpande, Assistant Professor, SLS-P. The Panel discussed the topic, ‘Misuse of provisions on Withdrawal of Prosecution’ and consisted of Adv. S. K. Jain, Advocate; Mr. Nitin Kondawale Patil, IRS; Adv. Hitesh Jain, Advocate; Dr. D.P. Singh, Sociologist, TISS; and Adv. Sampath Bulusu, General Manager Legal & Corporate Affairs, Shell Hazira LNG & Port Companies. Dr. Nitin Patil began the Panel Discussion cum Public Consultation by citingvarious improvements that can be considered from the systems of Germany, Austria and England. Following this, Adv. Sampath Bulusu cited several precedents that highlighted the duty of the Court and the Executive to prevent the criminal justice system from abusing the rights of the victims. Adv. Bulusu concluded his address by recommendingan amendment to the Code that allows for the public prosecutors to have the ability to pursue or drop a case even when the Executive forces him/her not to.

The sixth panel was moderated by Dr. Shashikala Gurpur and co-moderated by Dr. Atmaram Shelke. The Panel discussed the topic, ‘Cyber and Forensic’, and consisted of Adv. Satish Maneshinde, Advocate; Dr. Arvind Tiwari, School of Law, Rights and Constitutional Governance, TISS; Mr. Bhanupratap Barge, Rtd. ATS Officer; Dr. Harold D’Costa, Cyber Forensic Expert; and Adv. Hitesh Jain, Advocate. Dr. Harold D’Costa brought to light that an overwhelming number of the cases in the judicial system currently involves digital forensic elements and that simultaneously, there is an acute shortage of cyber forensic labs. As a result of the same, the proper channels for processing such evidence are subverted, raising concerns in relation to the validity of such evidence.

The seventh panel was moderated by Dr. Shashikala Gurpur and co-moderated by Prof. Shirish Kulkarni. The Panel discussed the topic, ‘Panel Discussion cum Public Consultation on the Narcotic Drugs & Psychotropic Substances Act 1985’, and consisted of Justice Shalini Phansalkar Joshi (Retd.), Bombay High Court; Adv. Satish Maneshinde, Advocate; Dr. Arvind Tiwari, School of Law, Rights and Constitutional Governance, TISS; Dr. Harish Shetty, Psychiatrist; Dr. S.C. Raina, Vice-Chancellor, HPNLU, Simla; Adv. Hitesh Jain, Advocate; Dr. D.P. Singh, Sociologist, TISS and Mr. Bhanupratap Barge, Rtd. ATS Officer. Prof. Kulkarni first introduced the recommendations derived from the research conducted. Adv. Maneshinde elaborated on the development of the law in question, and the intersection of the same in relation to the law with respect to bail. The same was illustrated by the case involving Rhea Chakrobarty which has brought forth several aspects deserving Panel Discussion cum Public Consultation. The liberal approach concerning to the consumption and possession of narcotic substances, adopted by a number of countries was thereafter discussed, weighing the moral contours of the issue as against its practical effects. Dr. Shetty emphasised on the harshness of the law in so far as it does not take into consideration the psyche of users, recommending the adoption of a more rehabilitative approach towards users.

The major recommendations discussed and reviewed on the Criminal Procedure Code, the Indian Penal Code, the Indian Evidence Act and NDPS Act are as follows:
 Need to create two wings of police: Law and Order and Investigation Wing;
 Need to increase co-operation between police &prosecutors, police and prosecutors should work hand in hand;
 Need to have accountability and quality of investigation and prosecution (need of audit for delay);
 Need to have Forensic Expert, Computer Expert etc. in the team for investigating sensitive cases;
 Need to have more Forensic Labs;
 Need to lower down the burden of proof in offences against women;
 Need to have time bound trial, need to establish adequate number of trial courts so as to reduce cases on daily boards;
 Need to establish specific unit for protection of witness;
 Need to create Digital/Paperless Criminal Justice System.
 The examination of lady victim should be by lady doctor or by a female under the supervision of the lady doctor;
 Third Gender personshall be examined by third gender doctor, if third gender doctor is not available then by female doctor;
 Need to have provision enabling filing and perusing the case on behalf of victim by public spirited person/NGO etc.
 Need to consider impact on secondary victims (child, parents, spouse, etc. of the primary victim) while deciding the quantum of compensation;
 Need to establish the court in Jail for bail and other matters (Fast Track);
 Need to reduce conditions for bail;
 Need to create special ward for LGBTQIA+ and Different Abled (special infrastructure for DA-including toilets);
 Video conferencing shall be conducted in the presence of Magistrate /officer of the Jail Court;
 Need to have frequent meetings of prisoners with family members via video conferencing;
 Need to have sentencing commission and need to adopt the sentencing greed;
 Need to considered mental health as a part of Section 84 IPC;
 Mental Age shall be considered while deciding liability;
 IPC 498A should be made as cognizable and non-bailable offence considering the rise in offences against women.

Go to Assignmentgeek.com and get your homework done.
Hire an expert to write a paper for you at writers per hour.
Learn about online entrepreneurship at JohannesLarsson.com