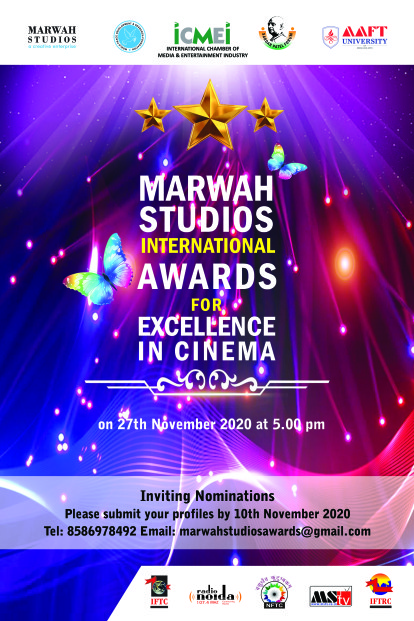 
Mumbai: In a join meeting of International Chamber of Media And Entertainment Industry and AAFT School of Cinema a poster of Marwah Studios International Awards For Excellence in Cinema was launched to be presented to international film makers on 27th November on the second day of Global Film Festival Noida 2020.

“We are feeling charged with new energy in constituting and announcing the MARWAH STUDIOS INTERNATIONAL AWAD FOR EXCELLENCE IN CINEMA for all those film makers who have contributed to the growth of World Cinema all these years. Their contribution must be recognized at international stage,” said Sandeep Marwah founder of Noida Film city and President of Marwah Studios.

Marwah studios has gained its international status and has been well recognized for its contribution to films, television, media, fashion and other glamour businesses. Its efforts were recognized very well during 2010 Commonwealth game when 102 short films made by Studios were broadcasted on more than 3000 channels in 196 countries for 102 days continuously. Marwah Studios has produced many international names in glamour world.