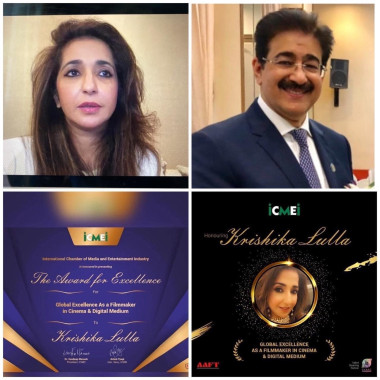 
New Delhi: “Cinema is the biggest form of entertainment. As you deal with it you grow with it. It is the real ambassador of culture of any country. Cinema production may look easy but its important to learn about it before hand. The art and science go together in this expression. You need to research the need of the people before you invest money in films. The story is the king in film making,” said Krishka Lulla of Eros Group while answering the questions of students from AAFT School of Cinema.

“We are amazed to see the involvement of Krishika in film production, which is not an easy job. She has a wonderful experience in Cinema and also a brilliant expression to explain to students. We feel honored in presenting award to Krishika for her outstanding contribution to Cinema,” said Dr. Sandeep Marwah Chancellor of AAFT University of Media Ans Arts.

Later Sandeep Marwah honored Krishika Lulla with The Award For Global Excellence As A Film Maker In Cinema And Digital Medium on behalf of International Chamber of Media And Entertainment Industry.