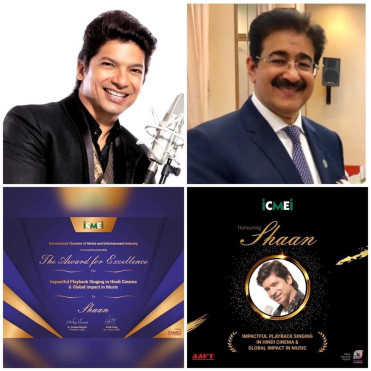 
New Delhi: “Music is like a dream. Without music, life would be a mistake. Music gives a soul to the universe, wings to the mind, flight to the imagination and life to everything. Music is a language that doesn’t speak in particular words. It speaks in emotions,” said renowned singer Shan while talking to the students of AAFT University of Media and Arts in a webinar to motivate them and to learn about music.

AAFT -Asian Academy of Film And Television has been conducting under graduate and post graduate courses in music from last few years. The students get extra ordinary exposure of the industry as a part of syllabus. Many important dignities from India and abroad are associated as guest faculty informed Dr. Sandeep Marwah Chancellor of AAFT University of Media And Arts.

Shantanu Mukherjee known as Shaan, is an Indian play back singer active in Hindi,Bengali, Marathi, Kannada, Telugu, Tamil, Gujarati, Marathi and Urdu language films and a television host. He hosted the shows Sa Re Ga Ma Pa, , Star Voice of India and many others.

Later Sandeep Marwah honoured Shan with The Award For Excellence For Impactful Playback Singing in Hindi Cinema & Global Impact in Music on behalf of International Chamber of Media And Entertainment Industry.

Go to Assignmentgeek.com and get your homework done.
There is no better press release writing company as 123 term papers.
Buy 100% high-quality replica watches with a 2-year warranty and free ground shipping!
Online assignment help by Copycrafter will free you from any academic issues
BuyEssaysCheap.com - affordable writing help