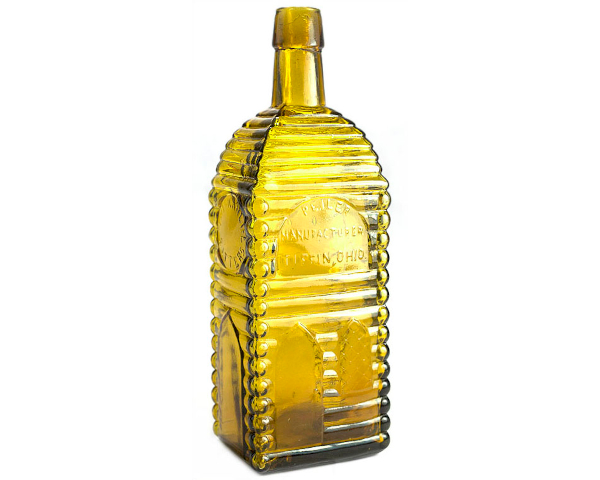 The online-only auction was headlined by two outstanding collections: the Paul and Mary Ballentine bitters bottle collection and the Don Spangler Midwestern bottles and glass collection. Of the 275 total lots in the auction, 140 found winning bidders. By the time it was all over, the sale grossed $354,600. All traffic was driven through the website, www.glswrk-auction.com.

“The Ballentines were pioneer collectors from Ohio who started collecting in the early 1960s,” said Jim Hagenbuch, the owner of Glass Works Auctions. “Paul passed away, but Mary retained the collection until her recent passing. Don Spangler is probably the last of the early collectors of early Ohio glass. At age 90 he reluctantly decided it was time to pass it on to other collectors.”

Following are highlights from the auction. All prices quoted include the buyer’s premium.

The American Life Bitters bottle (P.E. Iler, Mfg., Tiffin, Ohio) was from the Ballentine collection and was the top achiever of the auction. The 9 ¼ inch tall bottle (Ring/Ham, A-49) had a light to medium yellow color with an olive tone cabin, and featured a smooth base and applied tapered mouth. “This bottle was about perfect, save for a tiny spot of roughness on the tip of a lower log,” Hagenbuch said. “It’s rare in amber, but only a few exist in this yellow coloration.”

The Constitution Bitters bottle (Seward & Bentley, Buffalo, N.Y.), also from the Ballentine collection, was medium pink amethyst in color and was in perfect condition. The bottle (Ring/Ham, C-223), 9 ¼ inches tall, featured a smooth base and applied tapered collar mouth.

“Only two or three are known to exist in amethyst,” Hagenbuch said of the bottle, adding, “The others are so dark a strong light is needed just to see the color. That is not the case here. The color in this one explodes in normal lighting and is consistent throughout. Many bitters collectors had been waiting for this bottle. Some called it the ‘Holy Grail’ of the Ballantine collection.”

The St. Drake’s 1860 Plantation X Bitters bottle (Ring/Ham, D-105), just shy of 10 inches tall and manufactured in New York around 1862, boasted a medium moss green cabin, a smooth base and applied tapered collar mouth. A small chip off the inside edge of the lip and some light external staining on the front panel were its only flaws.

“The St. Drake’s bottle was recently 'picked' at the Elephant Trunk flea market in Connecticut – a favored venue of the Flea Market Flip reality TV show,” Hagenbuch said. “It’s possibly only the second known example in this unusual moss green color. In 1993 we auctioned the collection of Elmer Smith of Shelton, Washington. Lot 20 in that collection was at that time the only moss green Drake’s Plantation Bitters known and it sold for $10,000. This one brought $4,000 more.”

The pattern molded globular bottle made by the Zanesville Glass Works in Ohio was medium yellow olive in color and had a 24-rib pattern swirled to the right. The 8-inch-tall bottle (McK/Wil, color plate V), (Barrett, pg. 54), had a pontil scarred base and outward rolled lip.

“This classic Zanesville swirl was in a very rare and absolutely gorgeous color that remained constant throughout,” Hagenbuch said, “and the pattern remained bold even to the pontil. With the exception of a very few scratches, it was in pristine perfect condition.” The bottle came out of the Don Spangler collection and had been acquired from Jim Vitners in 1973, he added.

An H. P. Herb Wild Cherry Bitters bottle (circa 1885-1893, made in Reading, Pa.), in the motif of a cherry tree, changed hands for $9,000. The 10 ¼ inch tall bottle (Ring/Ham, H-93) had an olive yellow cabin, a smooth base and a tooled double collar mouth. “The bottle was quite rare in this pleasing coloration, and a very minor base flaw was non-offensive,” Hagenbuch pointed out. “How rare is the color? Only two have been sold at auction in the last 25-years, that’s how rare.”

Glass Works Auctions' next big sale is tentatively slated for later in the fall. Watch website for details: www.glswrk-auction.com.

Online assignment help by Copycrafter will free you from any academic issues
BuyEssaysCheap.com - affordable writing help
There is no better press release writing company as 123 term papers.