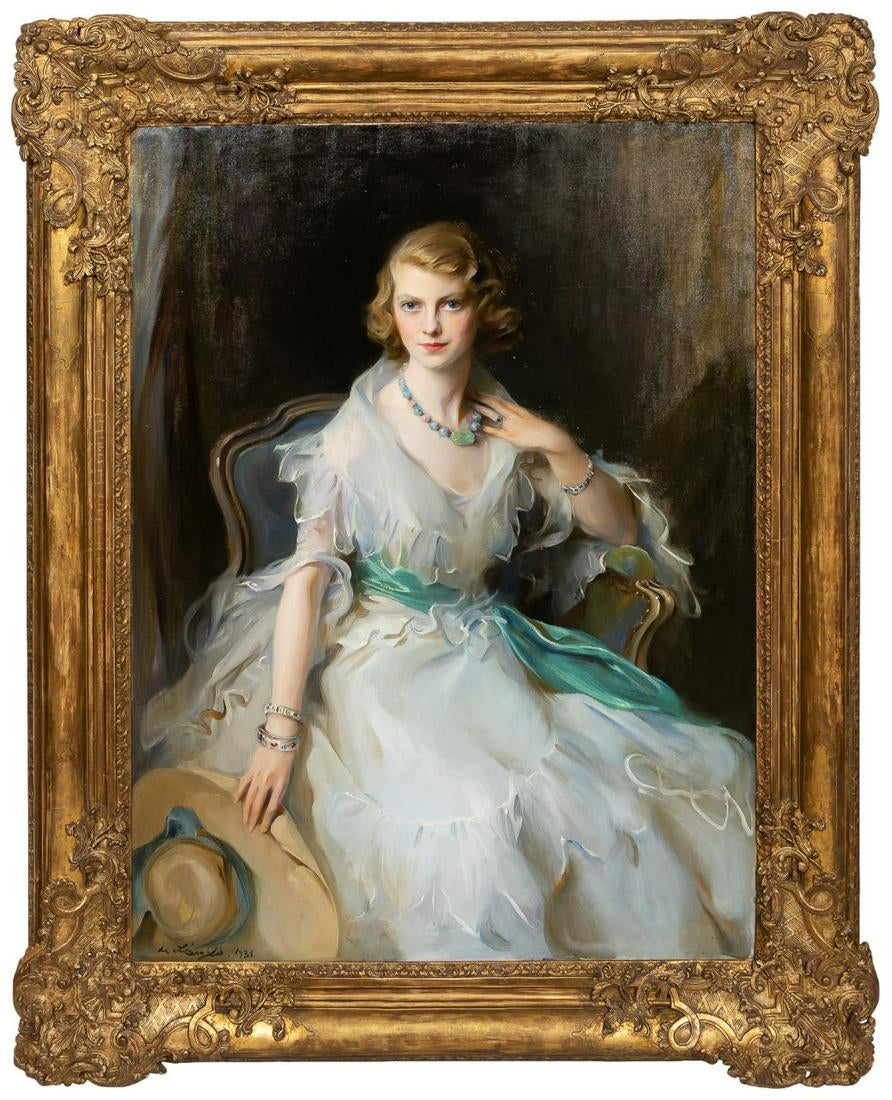 The oil rendering was a ¾ length portrait depicting one of the three “Golden Guinness Girls” and the daughter of Arthur Ernest Guinness (1876-1949), an engineer and the second son of brewing magnate Edward Guinness (1847-1927), a prominent businessman and philanthropist who, as head of the family’s eponymous brewing business, rose to become the wealthiest man in Ireland.

Philip de László was an artist known for his portraits of royal and aristocratic personages. In 1900, he married into the Guinness family himself by wedding Lucy Guinness and he became a British subject in 1914. The painting of Oonagh Guinness brought the second highest sum ever seen at auction for the artist. Another piece sold in December 2019 at Christie’s in London for about $350,000.

The White Oaks estate was filled with fine decorative arts from names like Steuben, Baccarat, Hermes, Christofle, Tiffany & Company, Lalique, Ralph Lauren Collection, Buccellati, Moser, Fornasetti and Asprey; as well as fine antiques from the Doris Duke Collection, acquired from around the world and previously sold at Christies. Most brought robust prices in the auction.

Following are additional highlights from the auction, which grossed $1,580,210, including the buyer’s premium. All of the 769 lots found new owners. More than 600 absentee and phone bids were executed and over 9,100 online bids were placed across four platforms: Bidsquare.com, LiveAuctioneers.com, Invaluable.com and Hibid.com. All prices include the buyer’s premium.

A pair of Chinese Ming dynasty (1368-1644) tileworks of Buddhist lions, from the Doris Duke estate, brought $37,200. The ochre, turquoise and aubergine glazed tileworks, each one 53 inches tall, depicted seated Buddhist lion figures on stands. Also, a pair of large Chinese Tang dynasty (618-907 AD) polychrome painted pottery horse figures in prancing stance, 21 ¼ inches tall on a 1 ½ inch base, sold as one lot for $12,400.

An exquisite 20th century Buccellati sterling figure of a bird of prey perched on a naturalistic stump, 28 inches tall and marked to the back of the tailfeather with maker’s mark, fetched $27,225. Also, an oil on canvas still life painting of sliced fruit by Peter Von Artens (Argentina, 1937-2003), titled Melons, depicting watermelons, honeydew and cantaloupe, about 40 inches by 42 inches (sight, less frame), brought $18,150.