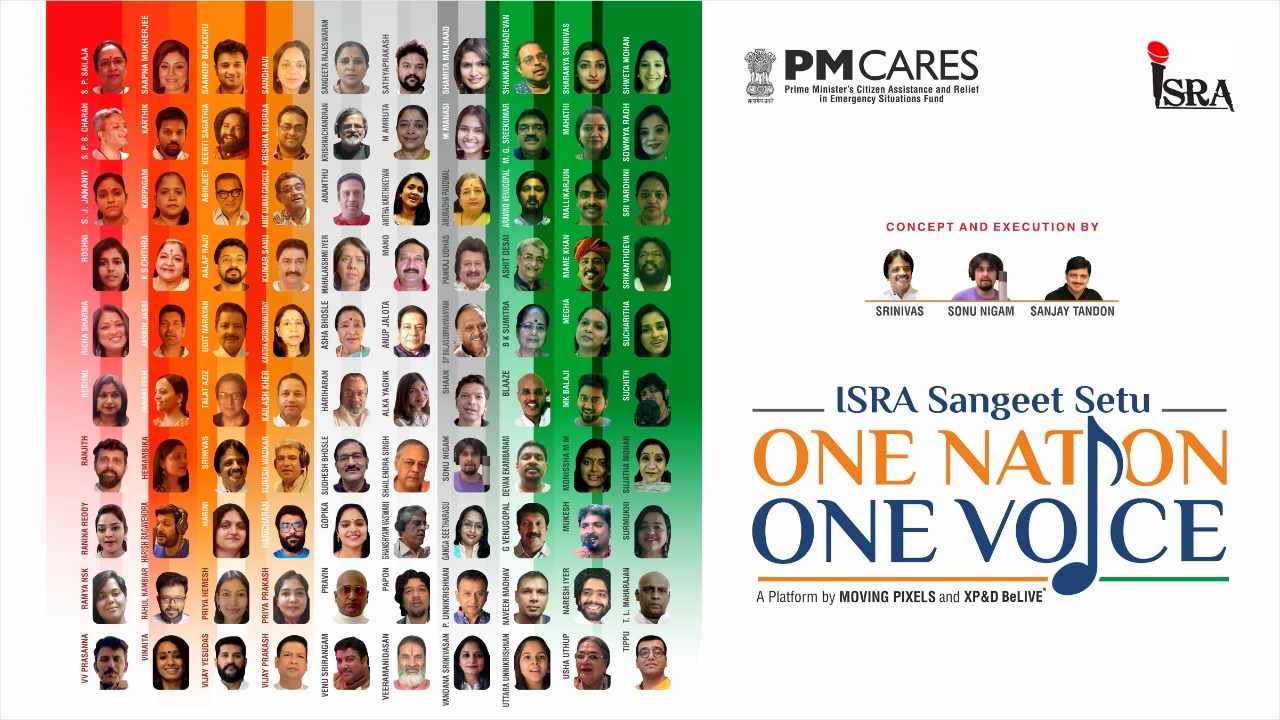 
India, 29th April 2020: With the blessings of Shri Lata Mangeshkar ji, 100 singers from ISRA will come together in One Nation One Voice - an anthem dedicated to corona warriors and in aid of PM Cares. One Nation One Voice is an acapella rendition by 100 artists in 14 languages and is the largest anthem platform ever.

Commenting on the initiative legendary singer Shri Asha Bhosle stated “Singers are artists who have always expressed numerous feelings of the masses in several musical ways. Thus, on this occasion when all of us are fighting against Corona as One Nation ably led by our Hon'ble Prime Minister Shri Narendra Modi, we 100 Singers of the Country under ISRA decided express out love for the nation and dedicate this Song as One Voice.”

She further added, “The anthem will be dedicated nation by Lata Mangeshkar ji on behalf of ISRA on 3rd May 2020.”

Never before has a galaxy of artists as large has come together for a cause. Singing in 14 different languages are legendry singers Asha Bhosle, AnupJalota, AlkaYagnik, Hariharan, Kailash Kher, Kavita Krishnamurthy, Kumar Sanu, Mahalakshmi Iyer, Mano, Pankaj Udhas, S. P. Balasubramanian, Shaan, Sonu Nigam, SudheshBhosle , Suresh Wadkar , Shailendra Singh, Srinivas, Talat Aziz, Udit Narayan, Shankar Mahadevan , JasbirJassi and 80 more artists. Thanking the singers for their contribution Mr.Sanjay Tandon, CEO of ISRA said “One Nation One Voice in aid of PM Cares is a dedication from ISRA where 100 artists pay tribute to all the people in the forefront of the battle against the Corona Virus and all the people at home who have supported the lockdown”

The song will be released across over 100 platforms on 3rd May -these include TV, Radio, Social Media, Applications, OTT, VOD, ISP, DTH and CRBT. “One Nation One voice not just an anthem it’s a National movement - we have over 100 broadcast, social, amplification and tech platforms supporting the launch” said Mr. Sukrit Singh of XP&D BeLive.

The anthem is the brainchild of Sonu Nigam, Srinivas and Sanjay Tandon.Speaking of the inspiration for the anthem, the multi-talented Sonu Nigam said “This is a collective tribute to the mammoth struggle and effort our Government and the entire medical and health workers are putting together in these times of global crisis. 100 singers coming together from different corners of India, is an unprecedented show of solidarity and love.”

Talking of their collaboration Srinivas commented “As artistes, it is our time to contribute in our own humble way. ISRA being the treasure house of singers in this country, we embark on a song with 100 voices and nothing else, to stir the nation’s heart and re affirm our solidarity. A hundred voices sing in unison for the nation.”

What makes the anthem even more appealing is that every artist has recorded from home, during this lockdown. Manish Baradia, Creative Director of Moving Pixels says “Working with home recording of audio and video is a beautiful challenge. There is a certain sincerity and effort that comes through that no packaging can match. The end result is inspiring. The anthem is composed for the digital age and can be enjoyed on TV, Radio, Devices and Caller Ring Tones.”