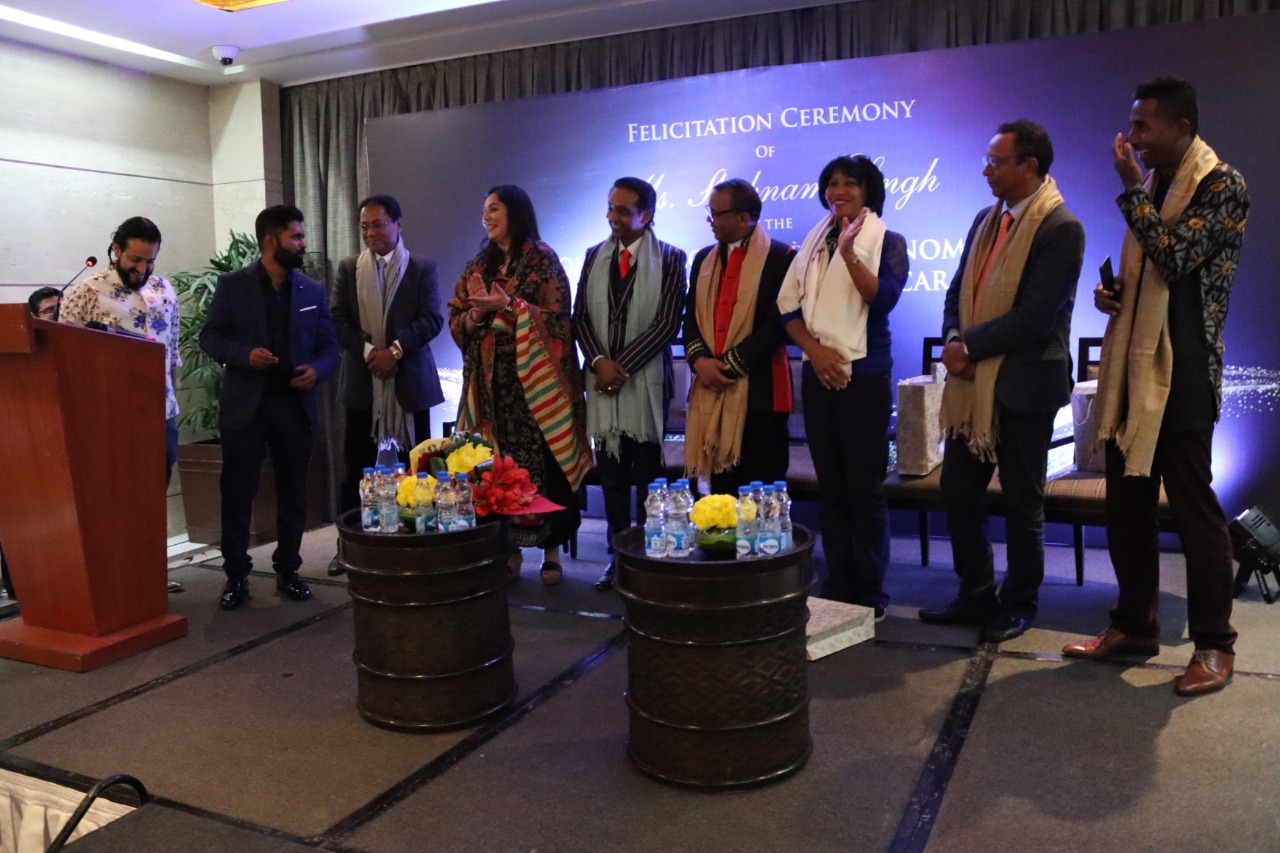 
11th December, 2019, New Delhi: Ms. Shabnam Singh, Chairperson of YouWeCan Foundation and Director at Yuvraj Singh Group of Companies has been appointed as the Conseillère Economique for Republic of Madagascar. Mother of international cricketing superstar Yuvraj Singh has donned many hats in her life, a life coach, a motivational speaker of exceptional repute, a philanthropist and a humanitarian has been involved in social work since a very young age. Adding another feather to her hat, she accepted the responsibility of Conseillère Economique for Republic of Madagascar and presented the delegates with a Yuvraj signed YWC Cricket bat and a beautiful handcrafted Charkha, the quintessential symbol of Mahatma Gandhiji who is the beacon of strong Indo-Africa ties .

Speaking at the event Ms. Shabnam Singh said, ”I am humbled on being chosen for this honour and am thankful to the distinguished guests for their presence today. I would like to take this as an opportunity to contribute something good for my country. I would dedicate my efforts towards strengthening the socio-economic-cultural relations between these two wonderful countries and move forward towards mutual wellbeing.”

“India has had maritime links with Madagascar for several centuries. Today both the countries successfully enjoy strong diplomatic and trade relations. Madagascar is one of the most incredible, open and accommodating countries in the world, in terms of both government and society. It is a rich and diverse country, with a very unique blend of African and Asian landscapes and cultures. By further strengthening its bond with Madgascar, India can support economic growth by promoting cooperation in a number of priority areas including infrastructure, human resources, agriculture, mining, defence, education, tourism etc.“, she further added.

Mr. General Richard Ravalomanana, Secretary of the State Government of Madagascar & Minister of Gendarmerie and Ministry of Defence said, “India and Madagascar enjoy cordial bilateral relations. Madagascar has been supportive of India’s demand for Permanent Membership of UNSC and G-4 initiative for Expansion of the UNSC. Madagascar has also supported India’s candidatures in various UN and other international bodies. Together both the countries can create new avenues for sustainable development in the continent. We are confident that as Conseillère Economique for Republic of Madagascar, Ms. Shabnam Singh will help us in taking India-Madagascar relations to newer heights.”

The felicitation ceremony marks the beginning of a new era to strengthen the socio-economic-cultural relations between the two countries and all the dignitaries raised a toast towards a bright future.