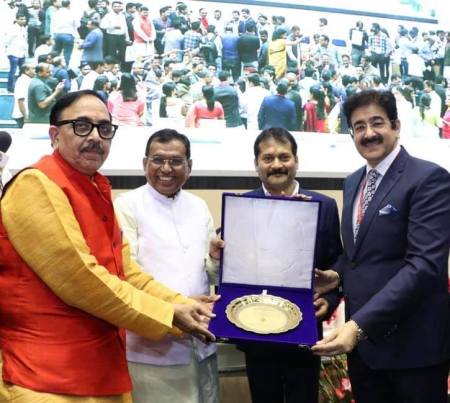 
New Delhi:” It was a great pleasure and privilege to honor 21 ministers from all the states of India who all have done extra ordinary well in their respective ministries along with Minister of Skill Development and Entrepreneurship Dr Mahendra Nath Pandey at Vigyan Bhawan,” said Dr. Sandeep Marwah Chief Scout For India.

“It was a surprise when I was also appreciated for my little contribution to Nation building through films, television, art, culture and education in the presence of august audience,” Dr. Marwah thanked U.S. Sonthalia of Fame India and Kirit Premjibhai Solanki, Member of Parliament (LS) for honoring him at Vigyan Bhawan.

Dr. Sandeep Marwah is seven times World Record Holder, recipient of Five Doctorates and more than 700 awards from all over the World. He is the cultural Ambassador of more than 50 countries and chairing 100 national and international organizations to built the relation between all through art and culture.

Dr. Marwah is the founder of Noida Film City, Marwah Studios, AAFT University and teacher to 19000 media professionals from 145 countries of the World.