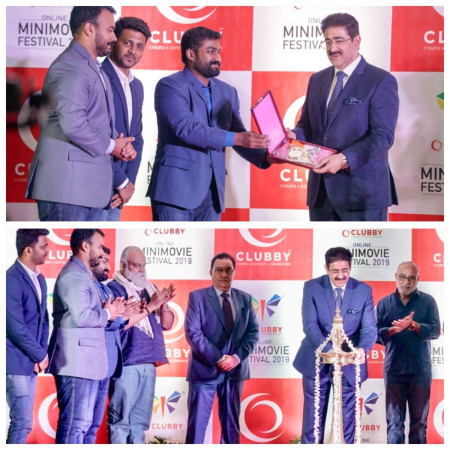 “The digitization and reduction in cost of film making have given many more people to showcase their creativity through films. We need many film promoters to come forward to extend help to young minds to explore their talent through these kind of festivals,” said Dr. Sandeep Marwah President of Marwah Studios while lighting the ceremonial lamp at the inauguration.

“I appreciate the idea of inviting short films in many languages, as the language of cinema is only emotions. Short films give you immense opportunity to project your ideas, capabilities and capacity to make films. A lot can be spoken through these short films. Many new avenues are available to present your short films,” added Dr. Marwah at the festival.

Clubby is an organization with an idea to create, Connect and Collaborate film makers from all over the World. Films are invited in 10 different language including Kannada, Tamil, Malayalam, Telugu, Hindi, Marathi, Gujarati, Punjabi, Bengali and English. International Chamber of Media And Entertainment Industry and Marwah Studios will support the event.

Go to Assignmentgeek.com and get your homework done.
Buy 100% high-quality replica watches with a 2-year warranty and free ground shipping!
There is no better press release writing company as 123 term papers.