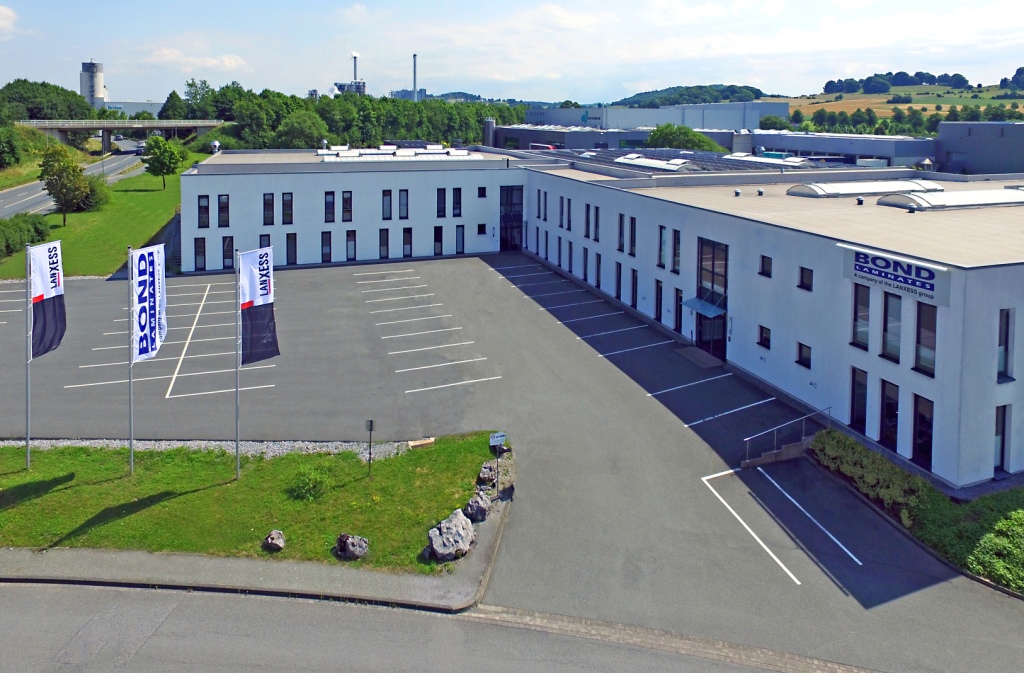 
Cologne – At its site in Brilon, Germany, Bond-Laminates GmbH – a wholly owned subsidiary of specialty chemicals company LANXESS – has commissioned two new production lines for Tepex continuous-fiber-reinforced thermoplastic composites. “We have increased our capacity for manufacturing Tepex by around 50 percent and, in doing so, are responding to the strong demand in the mass production of highly stressable components for lightweight vehicles and consumer electronics,” says Dr. Christian Obermann, Managing Director of Bond-Laminaets. To accommodate the expansion from six to eight production lines, a new hall covering around 1,500 square meters was constructed. The total investment ran to the mid single-digit millions and also comprised three cutting machines, including a new four-head waterjet cutting machine for prefabricating component cuts.

Tepex is becoming increasingly popular in the automotive industry for the large-scale production of lightweight structural components such as frontend and bumper brackets, brake pedals and underbody paneling components. One recent example involved two electrically adjustable single rear seats for a variant of the Audi A8, whose seat shells are manufactured in a hybrid molding process using the polyamide-6-based Tepex dynalite. The seat shells are around 45 percent lighter than a comparable metal version.

LANXESS also sees potential for Tepex to be used to produce backrests and armrests as well as seat shells for new, highly complex seating concepts in autonomous cars or for comfort seats for shuttle, VIP and family buses. Electric vehicles offer further attractive potential for Tepex. “The spectrum of applications ranges from brackets for frontends, doors and bumpers, luggage compartment recesses, battery housings and brackets for electrical and electronics modules through to structural components in the “greenhouse” section and structural trims in the underbody area to protect the battery,” says Henrik Plaggenborg, head of Tepex Automotive at LANXESS.

Typical applications of Tepex in consumer electronics include the thin-walled yet exceptionally strong and rigid structural components for cellphones, tablets, laptops and TVs – components that also have to meet strict aesthetic requirements regarding design and haptics. In the sports sector, Tepex is used for example in the manufacture of shoe soles, bicycle components, ski boots, body protectors and helmets.

LANXESS is a leading specialty chemicals company with sales of EUR 7.2 billion in 2018. The company currently has about 15,400 employees in 33 countries and is represented at 60 production sites worldwide. The core business of LANXESS is the development, manufacturing and marketing of chemical intermediates, additives, specialty chemicals and plastics. LANXESS is listed in the leading sustainability indices Dow Jones Sustainability Index (DJSI World and Europe) and FTSE4Good.

Go to Assignmentgeek.com and get your homework done.
Learn about online entrepreneurship at JohannesLarsson.com
Online assignment help by Copycrafter will free you from any academic issues