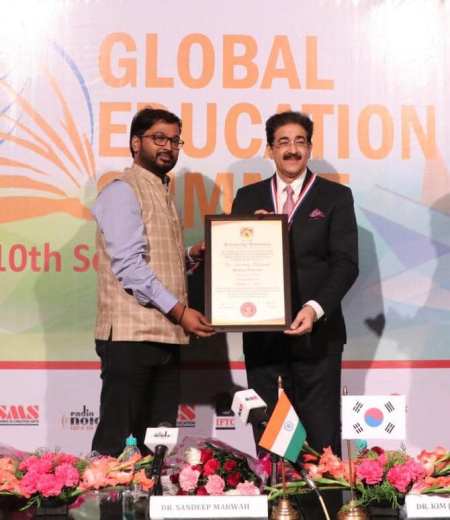 “The contribution of Dr. Sandeep Marwah is tremendous in films, television, media and education. The non-stop upliftment of standards in education & creativity is the mission of Dr. Marwah. The reach of his efforts has touched 145 countries of the World. He is an institution in himself,” said Dr. Elizabeth Cambell Registrar Ballsbridge University Dominica.

The Honoris Causa- Doctor of Literature was handed over to Dr. Sandeep Marwah by The Chief Guest of the Global Education Summit Dr. Kim Jae Hong President of International Youth Fellowship in the presence of more than 40 educational leaders from all over the country.

“I am touched by the gesture extended towards me by Dominica University. I am so thankful to University for bestowing upon me the highest academic award, This has induced me further to work hard towards promotion of education, arts and culture,” thanked Dr. Sandeep Marwah.

On-demand assignment help - find an assignment experts in 3 steps.
Online assignment help by Copycrafter will free you from any academic issues
Go to Assignmentgeek.com and get your homework done.
There is no better press release writing company as 123 term papers.