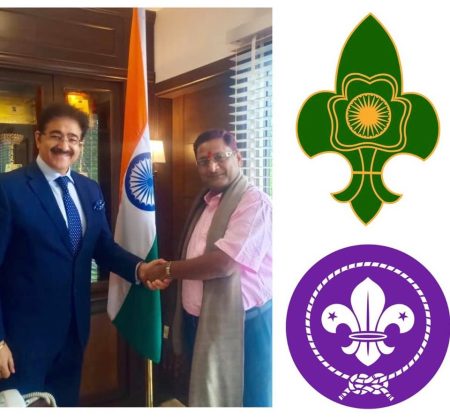 
New Delhi: Dr. Sandeep Marwah has been nominated as the Chief Scout For India by the department of Scouts and Guides. Now he will lead the organization in India and will be considered second in command after the Chief Patron Hon’ble Shri Ram Nath Kovind President of India.

“The Scouts /Guides Organisation (SGO) is a non political, non sectarian and secular organization. The purpose of this organization is to devote its volunteers to character building of Youth in India and abroad and promoting in them the feeling of selfless service to their country and humanity,” informed Dr. Sandeep Marwah.

“ The SGO has a hierarchy starting from the patrols, troops/companies, groups forming into Local, District, State Associations and goes up to the Nationwide Organization. This is open to all Scouting & Guiding Groups, persons as well as associations that is not affiliated with another national organization,” added Raj K.P.Sinha National Commissioner for India of The Scouts/Guides Organisation.

On-demand assignment help - find an assignment experts in 3 steps.
BuyEssaysCheap.com - affordable writing help
Go to Assignmentgeek.com and get your homework done.
Online assignment help by Copycrafter will free you from any academic issues
There is no better press release writing company as 123 term papers.